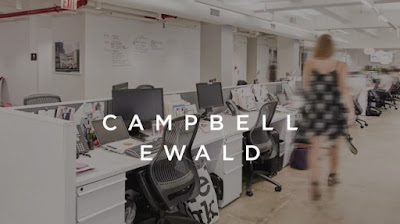 Adweek reported Campbell Ewald CEO Jim Palmer was fired following fallout from a staffer’s racist email. Apparently, the email was sent last October, inviting associates in the San Antonio office to celebrate “Ghetto Days” with “Ghetto music, Malt 45s at lunch, and of course, drugs and prostitution are legal all day until close of business.” Adweek updated the story to reveal a major client—USAA—terminated its contract with Campbell Ewald to find “a new agency that aligns with USAA’s culture and core values.” However, it’s not clear if USAA was responding directly to the racist email, as White holding company IPG—parent to Campbell Ewald—announced plans to create a standalone agency to service USAA in order to retain the business. Plus, Campbell Ewald replaced Palmer with another White man.

MultiCultClassics has called out Campbell Ewald for its hypocrisy, as well as its diversity statement. The current agency website proclaims, “We’re a diverse bunch with one goal: Work with purpose. Everything we create—from presentations to campaigns to birthday memes—is something our mothers would be proud of. If you work the same way, go on and apply yourself…here.” Yo mama would be proud to celebrate “Ghetto Days” with Campbell Ewald?

Jim Palmer out after ‘Ghetto Days’ note came to light

While the agency has not stated the reason behind the firing, the move comes just days after Adweek’s AgencySpy blog revealed that a white creative leader at the agency’s San Antonio office had sent an email in October 2015 inviting staffers to take part in “Ghetto Day.”

“Also please share with the teams that today is officially Ghetto Day in the SA, and we’re inviting our Big D homebitches to cycle in and pop a freak with us,” the email said. “Ghetto music, Malt 45s at lunch, and of course, drugs and prostitution are legal all day until close of business. Word, my cerebral gangsters.”

When the email was revealed Tuesday, CEO Palmer issued a statement saying: “This email is in no way reflective of who we are as an agency and what we stand for. We addressed this matter very seriously when it happened back in October. To those that were hurt and offended by this language, we sincerely apologize.”

The following day, sources told AgencySpy that the creative behind the email had been fired—months after it had first been spotted and addressed by executives.

Various sources have identified the employee who sent the “Ghetto Day” email as Jim Houck, who joined Campbell Ewald San Antonio as executive creative director in 2015 after working as a copywriter and creative director at CP+B, Saatchi & Saatchi and SapientNitro, among others.

UPDATE: After this story first ran, Adweek learned that insurance and financial client USAA has terminated its contract with Campbell Ewald in order to search for “a new agency that aligns with USAA’s culture and core values.”

IPG says it plans to spin off Campbell Ewald’s USAA team into a standalone agency in hopes of retaining the client.

Even before this week’s controversy, the Campbell Ewald agency network had lost several major accounts in recent years.

In 2010, General Motors sent its Chevrolet business to competitor Publicis after 91 years with Campbell Ewald. The agency later lost the U.S. Postal Service, Cadillac (which also went to Publicis) and, in 2015, the U.S. Navy business, which went to Y&R.

Nice to see some of the racism and diversity issues we've all been talking about for years finally dragged out into the light kicking and screaming. So there's that, I guess.

Damn. 200+ comments. It's like everybody's got a lot to say on this topic, and no forum to say it. Lotta hunger and anger and feelings about race issues in advertising over there.