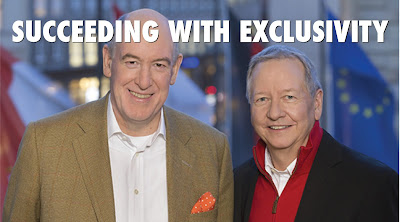 Adweek reported on the White male succession at Ogilvy, where former Global CEO Miles Young is handing the title to John Seifert. From a diversity perspective, the move is stereotypical of White advertising agencies. Plus, Seifert has consistently admitted his shop sucks at addressing exclusivity—and his promotion perfectly perpetuates the problem. Bravo!

The speculation about a successor to Miles Young is over: John Seifert is the new Ogilvy & Mather worldwide CEO, effective immediately. Young will continue as worldwide chairman until Sept. 1, when Seifert also assumes that role.

The 57-year-old Seifert will retain his duties as chairman and CEO of Ogilvy North America, but the agency expects to name a replacement for him in that job.

Last June, when word leaked about the Young’s decision to leave advertising for a top administrative post at his alma mater, Oxford University, the news came as a surprise. Since then, Ogilvy parent company WPP has worked with Young, to consider both external and internal replacement candidates.

A leadership shift back to NYC

When the Englishman was tapped to replace Shelly Lazarus as Ogilvy’s global CEO in 2008, the move was seen as a break from the more traditional power corridors at Ogilvy New York headquarters.

Young’s career was forged outside America, first in London, then in Europe and later in Asia, where he built those agency operations into the largest and most successful in the region while also working on WPP initiatives. His choice as CEO was perceived as a sign that a larger global view, emerging-market dynamism and new forward-thinking about technology and business growth would inoculate O&M’s larger global culture.

Now with a return to a New York-based American Ogilvy executive—Seifert joined the agency as a summer intern and has spent all 37 years of his career at the agency—the move is a reinforcement of the high importance of the agency’s American operations and headquarter execs like Seifert who have honed close relationships with multinational clients like American Express and BP.

Ensuring a continuity in Ogilvy leadership was a deciding factor in the CEO, according to Young. “The reason we chose John was he epitomizes the classic Ogilvy values.The critical thing about this brand is the culture behind it. (I’ve told Seifert:) ‘Don’t skimp on that.’”

Seifert, who has been part of Ogilvy’s worldwide executive committee since 2009, says he’ll be sticking with that group’s “very robust agenda”. More specifically: “Nothing is more important than the work. In this new digital age we need to build client business plans as they relate to the modern business environment. … I wouldn’t trade O&M’s assets for those at any other company. The trick is to manage with agility so we can stay focused on the future and be prepared for what’s coming.”

One thing Young has said he’s learned over the past seven years is that running the $2.7 billion Ogilvy multidisciplinary network is too big a job for one person. As part of the new management changes at the O&M, the network is expanding the responsibilities of Ogilvy’s two regional directors: Paul Heath, chairman, CEO of O&M Asia Pacific, and Paul O’Donnell, who holds the same title in Europe, Middle East, and Africa (EMEA) have been named worldwide executive directors.

Heath’s focus will be on global business development and O’Donnell, agency transformation, which includes looking at new operating structures, ways of working and new specialist opportunities. Heath has been based in Hong Kong, but will be spending more time in the U.S., with a possible move there, and O’Donnell will remain in London.

After he joins Oxford in September, Young will continue to work with key agency and WPP clients in a non executive role. But as he prepares for that transition, the agency also sought to underscore the importance of his longtime ally, worldwide chief creative officer Tham Khai Meng, who will now become co-chairman of Ogilvy’s worldwide board.

The two worked together for eight years in Asia, with Tham relocating to New York with Young and assuming global creative duties. During Tham’s time in that role, O&M’s global creative profile has boomed. In 2015 the network was named Network of the Year for the fourth consecutive year at the Cannes Lions Festival of Creativity.

While Seifert doesn’t have the same hands-on managerial international experience as his predecessor, he was responsible for a portfolio of 25 global clients totaling nearly $1 billion in revenue before taking on the leadership of O&M North America in 2009. He has been responsible for clients and held general management positions in Los Angeles, Chicago, Bangkok, and Singapore.

Seifert went back to New York in October 1992 and spent the next four years traveling for American Express about 70 percent of the time. He led the reengineering of American Express internationally when it became centralized in New York and London and launched BP globally in 2000.

I'll bet they get nominated for an ADCOLOR Award since one is tall and one is short, and that's Diversity of Thought.