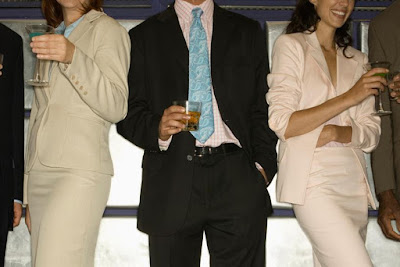 Kemp offered three resolutions for White women success: 1) Do Less; 2) Brag More and; 3) Party Often. Applying the trio of tips to minorities underscores the true inequities. For starters, minorities must do less with less—that is, less respect, fewer resources and crumbs. Bragging is pointless when you’re a receptionist, mailroom attendant, janitor, security guard or Chief Diversity Officer. As for partying, minorities are only invited when they’re serving as entertainment or waitstaff.

BTW, Kemp ought to direct her gripes at the predominately White male leadership running her own agency.

This quote sucks. But it’s true. And it results in women feeling they have to do more than their male counterparts. However — as backwards as it may seem — we’re more likely to succeed when we stop working so hard.

Why not commit to taking a step back this year in order to get further ahead? Here are three work-related commitments you’ll actually be able to keep:

The longer you’ve been in the industry, the more people you’ll meet in executive roles who make you ask yourself, “How did he get this job?! He has no idea what he’s doing!”

When you’ve worked the weekend to put together a presentation complete with concepts, budgets and next steps, and you come into the office bleary-eyed to see an email that Mitch — who did nothing all weekend but post Instagram photos of his kickball game — just received a promotion, it can be infuriating.

While showing that you can do everything can be impressive, those angling for the corner office must also show that they can inspire and motivate a team to move toward a goal together. Mitch enjoyed his weekend because he pulled in other teammates to help him out. While this approach may seem like a lazy move, it’s actually a strategic one … an executive-level one … one that prevents exhaustion, isolation and frustration while getting to the same goal.

There are a couple of caveats to the Mitch Method:

1. Ensure you’re able to survive without your go-to delegates. The less you know how to do on your own, the less valuable you look on paper, which is dangerous during budget cuts.

2. Always give credit to your support crew. If you constantly hog the spotlight, be prepared for the day when the stagehand removes the light bulb, proving to a massive audience that you have no clue how to replace it yourself.

Letting go and asking for help is ridiculously hard to do.

You may not have heard male executives venting about inequities, but you’ve probably heard the crack of their celebratory high-fives over business wins. Naturally, women see this as a cocky move. That’s because, as we grow up, little girls are told that bragging is impolite. We’re taught that the sunshine and rainbows we feel in our hearts is reward enough for doing something well.

Well, in the business world, that view is bullshit.

Here’s the thing: if you don’t broadcast your accomplishments to your superiors, they won’t know you were behind them. Then, when it’s time for promotions, you’ll get passed up.

My five-step formula for success has resulted in every major promotion and raise I’ve received:

1. Forward kudos from clients and colleagues to my boss.

2. Showcase my strongest projects within my updated portfolio. (This move not only makes it easier for your boss to push for your new title and salary, it proves that you’re ready to interview elsewhere.)

3. Present my desired salary based off the most recent industry rates in my city.

4. Ask what I need to accomplish in order to get my next raise/title so I can continue tracking progress.

Keep your pitch short and sweet and arm your boss with what he or she needs to push for your raise or title change. Creating a leave-behind your boss can share is important, too. It’s up to you to take the initiative and prove you’re ready for something bigger and better.

The further you move up the food chain, the more important bonding outside the office becomes. For those of us who prefer recharging from a rough day with a pint of ice cream in one hand and a remote in the other, this is not great news.

If you want to excuse yourself from every invite, that’s your choice. Just know that, by making it, you’re also excusing yourself from off-the-record conversations, idea exchanges, and getting to know your colleagues and clients as people. Plus, according to a statistic I just made up, people are 98.91% more likely to talk trash about you when you consistently decline their invitations.

Emails, texts and phone calls connect us to information, but not each other. Spending face time with those in your industry is the best way to develop solid relationships. Plus, if no one understands who you are or what you stand for, they’ll make something up. And you probably won’t like their version of your story.

Committing to doing less, bragging more and partying often is way more attainable than eating nothing but free-range tofu, reorganizing your apartment into a zen meditation space and calling your mom every day. Be real, take care of yourself, and enjoy a fresh approach in the new year.