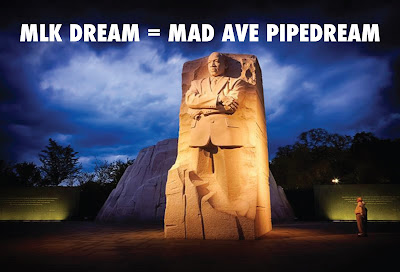 The essay opened with a question posed during a 2008 Advertising Week panel, where someone wondered if Barack Obama’s presidential victory would hurt diversity efforts via the assumption that the United States had reached some type of post-racial Nirvana. Warren stated inclusive initiatives were not adversely affected by Obama’s arrival into the White House, adding, “In fact, more positions dedicated to diversity were created (13 alone within Omnicom Group) and more resources were allocated immediately after Obama took up office.” Okay, but assigning “more positions dedicated to diversity” does not equal more diversity; rather, it means more pimps and smokescreens. Warren also failed to acknowledge that exclusivity has increased as minority representation has decreased. Of course, it’s difficult to positively confirm because White holding companies like Omnicom refuse to share EEO-1 data with the public.

Additionally, Warren declared, “As Obama takes his last lap as President of the United States, the hope and change we longed to see manifest in society is shining through in our industry.” This is semi-true in the work, as White advertising agencies are using diverse casting in patronizing ways. But it’s not true in the workplace. And isn’t that where Chief Diversity Officers should be making a difference?

“Today, I am not alone in making sure that balanced representation of diverse individuals in advertising, PR, Hollywood and tech industries continues to make significant strides,” proclaimed Warren. “It’s a common fight and, like MLK did, we all understand that change denied anywhere diminishes change everywhere.” Um, please provide evidence of the “significant strides” happening in advertising, PR, Hollywood and tech industries. Also, please stop referencing MLK. He would probably not approve of the alleged progress being made in the listed fields.

Hope and change: Did we win?

As Obama finishes out his last days in the White House, Omnicom’s chief diversity officer considers progress made

At an Advertising Week panel discussion in 2008 sponsored by The New York Times, Thomson Reuters and Time Inc., someone asked, “If Obama wins, do we lose?” Considering my role as Chief Diversity Officer of Omnicom Group, I took “we” to mean those of us who lead the diversity efforts in advertising — the champions, officers and directors.

Would Barack Obama’s victory create a false impression that America is post-racial? Would companies cut diversity programs altogether? This of course did not happen. In fact, more positions dedicated to diversity were created (13 alone within Omnicom Group) and more resources were allocated immediately after Obama took up office.

Now in 2016, America is divided more than ever. But, you wouldn’t know that from looking at the commercials, print ads and other marketing materials produced by our industry daily. From Apple, GAP, Honey Maid to Campbell’s Soup, Wells Fargo and the Ad Council, marketers seemed to have (knowingly or not) grasped the true meaning of Martin Luther King, Jr.’s credo: “We hold these truths to be self-evident, that all men are created equal.” Admittedly, there have been missteps, but our industry has come a long way from the days of using homophobia as a punch line or a homogeneous cast of characters to sell a product. We just will not accept that.

As Obama takes his last lap as President of the United States, the hope and change we longed to see manifest in society is shining through in our industry. But as MLK said in his now famous speech, “This is no time to engage in the luxury of cooling off or to take the tranquilizing drug of gradualism.” A formidable reminder that we must continue to create advertising that will inspire the current and future generations of our nation.

I remember as a little girl watching “The Carol Burnett Show” and “General Hospital” with my grandmother in her kitchen after school. The commercials would come on and I was hooked but not for the reasons you might think. I was searching for anyone in those commercials who looked liked me.

I was often disappointed but always celebrated when I saw someone of color in a commercial, no matter how big or small the role. The feeling of elation was palpable and I am sure these moments were a pre-cursor to the work I do today. I truly believe these moments spent with my grandmother put a dream in my heart. I was given a dream to change the ratio of representation not only in front of the cameras but for those who are behind them as well.

Today, I am not alone in making sure that balanced representation of diverse individuals in advertising, PR, Hollywood and tech industries continues to make significant strides. It’s a common fight and, like MLK did, we all understand that change denied anywhere diminishes change everywhere.

If you are not a Chief Diversity Officer, you are an internal diversity champion. If you are not an internal champion, you are a mentor to a young professional or female creative. If you are not a mentor, you are speaking up for someone who can’t do it themselves. Be something to someone. To quote MLK one last time: “Human progress is neither automatic nor inevitable. … Every step toward the goal of justice requires sacrifice, suffering, and struggle; the tireless exertions and passionate concern of dedicated individuals.”

According to a recently published article by Digiday entitled “2016 Year in Preview: Holding Companies Make Diversity Their Business,” 41.5% of overall management positions are occupied by women and 24.3% of the U.S. workforce is multicultural at the four big holding companies. Progress. Although several organizations closed shop once marriage equality was achieved, the numbers above would not shutter organizations like ADCOLOR, Catalyst, 3% Conference or GLAAD who are dedicated to keeping creative industries honest and sharing best practices.

I was once given a dream that one day I will live in a nation where I would not be judged by the color of my skin but by the constitution of my character. I still believe that may happen. But, until then, I will work tirelessly to make sure that little girl in her grandmother’s kitchen will never be disappointed again.

I have a dream, too.

It's that Tiffany Warren puts up or shuts up, and demands the EEO-1 data.

And she should renounce the salary she's earning from being on the Adcolor board, since it's paid for by the very same holding company that's refusing their shareholders' calls to show the diversity numbers.