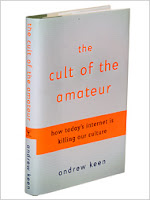 The Cult of the Amateur: How Today’s Internet is Killing Our Culture by Andrew Keen was originally published in 2007. So more prominent sources than MultiCultClassics have already reviewed it. Why, there’s even a pretty funny critique by Lawrence Lessig, an Internet law professor at Stanford University and noted author, who apparently took offense to Keen’s comments about him and proceeded to pick apart the book’s “sloppiness, error and ignorance.”

Regardless, The Cult of the Amateur should be required reading for everyone getting deeply involved with digital communications, as Keen ponders ideas that demand consideration from an advertising perspective. Yeah, Keen tends to go over the top on a few subjects—and gurus might find sloppiness, error and ignorance—but he still serves provocative food for thought.

Keen points out consumers are having an increasingly difficult time separating the ads from the content in our Web 2.0 world:

Advertising creatives have already been exploiting the situation, using bait-and-switch tactics or total lies to lure online consumers. In certain instances, perhaps there is a compelling reason for inventing messages that don’t look or feel like ads. But where do we draw the line? The industry has always had a strained relationship with the public. Adpeople and advertisers are hardly viewed as trustworthy. Won’t the final result of deliberate deception inspire further suspicion and loathing—plus reduced recall and instant dismissal?

Additionally, the blogosphere presents fresh controversies like Mrs O, where visitors eye Michelle Obama’s wardrobe and accessories, courtesy of Bartle Bogle Hegarty LLC. Some have declared we shouldn’t care who publishes the material. However, a significant percentage of the blog’s fans are probably Black women. Would they be interested to know Mrs O is being brought to you by the wonderful folks of Madison Avenue, where Blacks have faced discrimination for generations? Does it matter? It’s tough to say.

Throughout our history, there have been practitioners and disciplines that almost delight in tricking people for attention. Direct marketing is especially guilty, with misleading envelopes and spam that appears to be official, important or friendly. Culprits insist the ROI and response rates justify the means. But the public has labeled much of direct marketing as junk mail. What curse word will they ultimately pin to Web 2.0 marketing?

Keen’s rant focuses on the “democratization” birthed by the Internet—the spawning of amateurs who’ve replaced the experts in our culture.

This phenomenon is evident in the glut of ad blogs, where any low-level art director or copywriter with a WordPress account feels qualified to unseat Bob Garfield, and local media wonks believe they’re the reincarnation of Rosser Reeves, David Ogilvy and Bill Bernbach.

One wonders if Keen’s observations also apply to the production of digital advertising. NeoExperts accustomed to DIY directing turn viral videos into in-house projects. Who needs David Fincher or Joe Pytka to enhance a storyboard and take things to the next level? Why, Seth has been a Wunderkind cameraman ever since Mom and Dad bought him a Sony Handycam® in community college. Forget Annie Leibovitz or David Carson. I’ve got a digital camera in my cubicle, and I’m proficient in Illustrator, InDesign, Photoshop and Flash.

It doesn’t help that meager budgets and overly ambitious schedules are influencing the issues. Or that ROI and response rates justify the means—and the mediocre design.

Digital democratization has invited the masses to participate in crafting homemade ads too. But honestly, has anyone seen a decent consumer-generated commercial in the last century? Can we please quit this lazy gimmick immediately?

The online masses become angry mobs in a flash as well, quickly exposing cultural cluelessness—real and imagined. So you’ve got to be ready to react, revise, respond, repel, regroup, reject or simply do nothing. Which route will you choose to avoid looking amateurish?

In the end, it’s imperative to hold the digital marketing debates and discussions now. The Web 2.0 world defies control—we can’t hope to manage it. But we can exhibit greater purpose, intelligence and responsibility when we create in the undiscovered country. The Cult of the Amateur: How Today’s Internet is Killing Our Culture by Andrew Keen gives us motivation to seek better ways.
Posted by HighJive at 12:01 AM