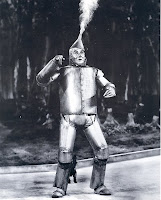 Metal of dishonor in a MultiCultClassics Monologue…

• Aluminum manufacturer Alcoa announced that 13,500 workers would get canned. Get it? Aluminum and canned. Bwahaha!

• Automakers recorded their worst December to Remember in 15 years, as Chrysler led the pack with a 53 percent sales decline. Hey, if they decided to build some aluminum cars, lots Alcoa workers could go back to work.

• Air India is taking heat after firing 9 flight attendants for allegedly being grossly overweight. The women ranged from 24 to 70 pounds overweight. In the U.S., they might have been charged hefty fees for the extra junk in da trunk.
Posted by HighJive at 10:15 PM