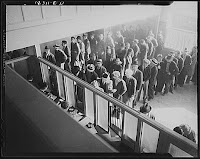 Weekend tallies in a MultiCultClassics Monologue…

• Hertz announced plans to dump 4,000 workers worldwide. No word if Avis will try harder with cuts of its own.

• WellPoint is not feeling well, as the health insurer plans to cut 3.5 percent of its staff, which equals about 1,500 jobs.

• Pfizer might dump over 2,000 of its salespeople. Which should spur sales of Zoloft® nationwide.

• The Circuit City collapse could cost up to 40,000 lost jobs. Fortunately, most of the overpaid salespeople were dumped in 2007.
Posted by HighJive at 11:02 AM