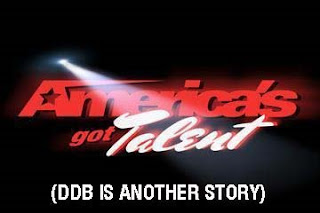 Advertising Age published an amazingly asinine article titled, “Recruiting Top Talent in a Downturn,” written by two executives from DDB Worldwide in New York. Go ahead and read the drivel if you have five minutes of your life to completely throw away.

Of course, you can scan the 950+ words and not find a single reference to diversity. This is hardly surprising from an Omnicom shop—especially one that apparently views minorities as candidates for the mailroom.

The authors are Chief People Officer Greg Taucher and Chief Communications Officer Jeff Swystun. First of all, what the fuck is a Chief People Officer? Secondly, when did Chief Communications Officers become qualified to comment on hiring? DDB recently elected a Chief Diversity Officer, and Omnicom followed with a similar appointment. Why weren’t these individuals tasked with presenting a perspective on luring top talent? Could it be because they have no true authority in the matter? Or does the quest for top talent exclude non-Whites?

The moronic musings of Taucher and Swystun include:

Six months ago, we were all battling in the “war for talent,” in which much of the leverage arguably was in the hands of the recruit.

Recruits will still be discriminating when it comes to choosing agencies to work for as part of their broader career strategies (if they are smart). That means the brand and culture of an agency will see new and increased relevance.

The selling points agencies emphasize to attract talent are changing rapidly. Let’s face it: Advertising agencies all wish to communicate creative, youthful personas. That is why we enjoyed and have clung to aspects of the dot-com era—foosball, pool tables, half-day “sabbaticals,” popcorn machines, free-beer Fridays.

Six months ago, ... much of the leverage arguably was in the hands of the recruit. Um, what industry have Taucher and Swystun been working in? Downsizing and dumb management have seriously restricted job seekers’ career options and tactics—and they lost their bargaining power long before the summer of 2008.

Advertising agencies all wish to communicate creative, youthful personas. With foosball? Um, DDB comes off like a toupee-toting divorcee cruising college campuses for coeds. And is the writers’ remark really rooted in ageism?

It’s hard to imagine what might have motivated Taucher and Swystun to share their outdated and out-of-touch pap. But their public display of cultural cluelessness makes them the perfect recruits—for Carmen Van Kerckhove.

Messrs. Taucher and Swystun, CLICK HERE NOW!
Posted by HighJive at 12:02 AM

People dont get it 6 freaking months ago there was no shortage of talent. Its all a smoke and mirrors to avoid the real situation of no-diversity policy of the madison avenue elite.
This has been going on for generations/decades. THe hiring of diversity managers, and presidents dont mean a damn thing, the culture is still bigoted and rascist towards people of color. plain and simple. Ive been reading this blog since 2005/2006 in 4 or 5 years what has really changed. Were actually moving in reverse!!