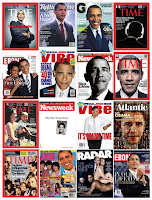 From The Associated Press…

In Obama, many see an end to the baby boomer era

NEW YORK---- When George W. Bush lifts off in his helicopter on Inauguration Day, leaving Washington to make way for Barack Obama, he may not be the only thing disappearing into the horizon.

To a number of social analysts, historians, bloggers and ordinary Americans, Jan. 20 will symbolize the passing of an entire generation: the baby boomer years.

Generational change. A passing of the torch. The terms have been thrown around with frequency as the moment nears for Obama to take the oath of office. And yet the reference is not to Obama’s relatively young age—at 47, he’s only tied for fifth place on the youngest presidents list with Grover Cleveland.

Rather, it’s a sense that a cultural era is ending, one dominated by the boomers, many of whom came of age in the ‘60s and experienced the bitter divisions caused by the Vietnam War and the protests against it, the civil rights struggle, social change, sexual freedoms, and more.

Those experiences, the theory goes, led boomers, born between 1946 and 1964, to become deeply motivated by ideology and mired in decades-old conflicts. And Obama? He’s an example of a new pragmatism: idealistic but realistic, post-partisan, unthreatened by dissent, eager and able to come up with new ways to solve problems.

“Obama is one of those people who was raised post-Vietnam and really came of age in the ‘80s,” says Steven Cohen, professor of public administration at Columbia University. “It’s a huge generational change, and a new kind of politics. He’s trying to be a problem-solver by not getting wrapped up in the right-left ideology underlying them.”

Obama, it must be said, is technically a boomer; he was born in 1961. But he long has sought to draw a generational contrast between himself and the politicians who came before him.

“I sometimes felt as if I were watching the psychodrama of the baby boom generation—a tale rooted in old grudges and revenge plots hatched on a handful of college campuses long ago—played out on the national stage,” he wrote of the 2000 and 2004 elections in his book, “The Audacity of Hope.”

It’s been a while since historians spoke of generational change in Washington. Fully 16 years have passed since Bill Clinton, the first boomer president, took office. Before that, presidents from John F. Kennedy to George H.W. Bush—seven straight—were part of the World War II generation, or what Tom Brokaw has termed the “Greatest Generation.”

If Obama isn’t a boomer in spirit, then what is he? Not exactly a member of Generation X, though obviously that generation and the next, Generation Y (also known as Millenials) embraced him fully and fueled his historic rise to the presidency.

Some call late boomers like Obama Cuspers—as in, the cusp of a new generation. One book has called it the 13th generation, as in the 13th generation since colonial times. And Pontell, also a political consultant in Los Angeles, has gained some fame coining a new category: Generation Jones, as in the slang word ‘jonesing,’ or craving, and as in a generation that’s lost in the shuffle.

Jonesers are idealistic, Pontell says, but not ideological like boomers. “Boomers were flower children out changing the world. We Jonesers were wide-eyed, not tie-dyed.”

And Obama, he says, is “a walking, living prime example of Generation Jones. He’s a classic practical idealist. It’s not the naive idealism of the ‘60s.”

Wide-eyed or tie-dyed, Obama will be sworn in by an early “Joneser” himself—Chief Justice John Roberts, who turns 54 at the end of January. And while the average age of the new Congress is 58.2 -- an early boomer group—the new president is bringing some “Jonesers” with him.

Obama’s chosen treasury secretary, Timothy Geithner, is 47. His pick for education secretary, Arne Duncan, is 44, as is Susan Rice, his U.N. ambassador. (His apparent pick for surgeon general, 39-year-old neurosurgeon and TV correspondent Sanjay Gupta, is a true Gen Xer.)

Of course, Obama’s also bringing in veteran Clintonites—most notably Hillary Rodham Clinton, 61, his former campaign rival, as secretary of state. And his vice president, Joe Biden, 66, and defense secretary, Bush holdover Robert Gates, 65, are pre-boomers. But those are the kind of choices—inclusive of other perspectives, embracing rivals—that lead many to call Obama the first post-boomer president.

“It may be technically correct to call him a boomer,” says Douglas Warshaw, a New York media executive who, at age 49, is part of whatever cohort Obama is in. “And it’s in the Zeitgeist to call him a Gen Xer. But I think he’s more like a generational bridge.” He adds that Obama got where he was by “brilliantly leveraging the communication behaviors of post-Boomers,” with a campaign waged across the Web, on cell phones and on social networking sites.

One analyst of popular culture believes Obama definitely symbolizes a new generation—just not one connected to the year he was born.

“I think it’s hilarious that everyone wants to categorize people by their birth year, especially now, a time when our parents are on Facebook,” says Montana Miller of Bowling Green State University. Obama, she says, represents a generational shift in ways less tangible than age.

“You can see it from his approach to knowledge. Never before have we had a president who’s troubled about giving up his Blackberry,” Miller says. (Indeed, Obama is still in a struggle over whether he can keep the device.) “He’s constantly exposed to multiple perspectives, to what people out there feel and think.”

Obama’s biracial heritage also plays into the generational shift, Miller says. “It’s so emblematic of how the world is changing,” she says. “So many people are now some sort of complicated ethnic mix. Today’s youth are completely comfortable with that.”

Will Obama speak of generational change when he stands on the podium to issue his inaugural address? Given some of his rhetoric on the campaign trail, it’s reasonable to think he will—just as, some six months before he was born, JFK pronounced on Inauguration Day that “the torch has been passed to a new generation of Americans, born in this century, tempered by war, disciplined by a hard and bitter peace.”

Interestingly, Kennedy is often claimed by boomers to be one of their own, even though he was nothing of the kind; born in 1917, he’d be 91 now. In the same way, many Gen Xers and even Gen Yers like to claim Obama, too.

“As humans we all want to be part of something bigger than ourselves, part of a page in a history book,” Pontell says. And at least for now, he adds, “Obama’s a rock star, and people are dying to call him one of their own.”
Posted by HighJive at 12:46 PM