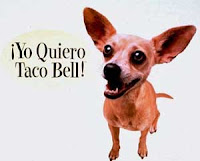 Appeals court ruling favors creators of the Taco Bell Chihuahua
The fast-food chain is solely liable for $42 million in breach-of-contract awards to two Michigan men who developed the mascot idea, which was the basis of the company’s hit ad campaign in the ‘90s.

The wise-cracking Chihuahua who earned millions for Taco Bell Corp.—and some criticism from Latinos as an ethnic stereotype—has a new slogan:

A federal appeals court Friday ruled that Taco Bell is solely liable for $42 million in breach-of-contract awards to two Michigan men who created the diminutive mascot that starred in the Irvine fast-food giant’s hit $500-million advertising campaign in the 1990s.

TV commercials featured the dog decked out as a beret-sporting revolutionary or bandit in sombrero, stirring complaints that they amounted to derogatory depictions of Mexicans. But the spots featuring the Chihuahua and voice-over by actor Carlos Alazraqui were phenomenally successful.

The ads stopped running in 2000, freeing the dog, named Gidget, for further big- and small-screen fame, with roles in “Legally Blonde 2: Red, White & Blonde” and Geico insurance ads. She also appeared on “The Tonight Show With Jay Leno,” during which she was given a choice between a Taco Bell chalupa and Kentucky Fried Chicken. KFC, which like Taco Bell is a subsidiary of Louisville, Ky.-based Yum Brands Inc., won out.

A dispute over the rights to market the sassy Chihuahua began in 1998, when Joseph Shields and Thomas Rinks of Grand Rapids, Mich., filed suit alleging breach of contract. The developers of a “psycho Chihuahua” cartoon had been in talks with Taco Bell advertising agents to adapt the character for TV spots when, the men claimed in their lawsuit, Taco Bell took the idea to another ad agency, TBWA\Chiat\Day.

In June 2003, a federal jury in Michigan ordered Taco Bell to pay the creators $30 million, and a federal judge tacked on nearly $12 million more in interest three months later. The judgments prompted Taco Bell to sue TBWA, arguing that the ad agency was liable for the disputed content.

Friday’s decision by the U.S. 9th Circuit Court of Appeals in Taco Bell Corp. vs. TBWA ruled that the fast-food chain, not the ad agency, was responsible for the ads and the awards due the Wrench agency owned by Shields and Rinks.

When asked if Taco Bell would appeal the decision, company spokesman Rob Poetsch said: “We just received the opinion today and are reviewing our options.”
Posted by HighJive at 12:13 PM