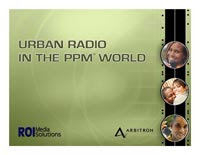 Updated: Arbitron Agrees to Settle Lawsuits
The suits alleged that the rating company engaged in deceptive marketing in the deployment of its portable people meters

NEW YORK Arbitron said today that it has signed consent agreements to resolve lawsuits brought by the states of New York and New Jersey in October that alleged the rating company had engaged in deceptive marketing in the deployment of its portable people meter in the New York radio market.

The New York suit also charged that Arbitron had failed to disclose flaws in the New York PPM that resulted in the underrepresentation of African-American and Hispanic radio listeners, causing financial harm to minority broadcasters in the market. The New Jersey lawsuit alleged violations of that state’s consumer protection and civil rights laws relating to the marketing and commercialization of the portable people meter.

The states confirmed the agreements, with the New York State Attorney General’s office calling its settlement the first of its kind in the nation and saying it calls for an “overhaul” of Arbitron’s New York PPM methodology.

“The radio airwaves should represent the diversity of New York State,” Andrew Cuomo, New York State Attorney General, said in a statement. “With this lawsuit, we sought to address the misrepresentation of a flawed product in the marketplace and its impact on the communities that need the most protection. This agreement ensures that Arbitron will fairly measure radio listenership in New York and fairly represent New York’s diverse radio market. As Arbitron works to improve this product, which should not have been released in its current form, my office will aggressively hold Arbitron to rigorous standards to make PPM a better product.”

New Jersey Attorney General Anne Milgram said the settlement “will ensure that Arbitron consumers are receiving a more accurate sampling product while, at the same time, ensuring that minority-owned broadcasting outlets are competing on a more level playing field.”

Arbitron CEO Steve Morris stated: “Broadcasters, agencies and advertisers in New York can continue to use PPM measurement of radio without any hesitation or reservation. We are also pleased to be able to resolve this action within the framework of our continuous improvement program for the portable people meter ratings service in the New York radio market. These initiatives are sure to increase the accountability of radio to the benefit of all New York radio broadcasters and their advertisers.”

As part of the agreements, Arbitron pledged to recruit more people for its listenership panels in cell phone only homes and to make greater attempts to recruit people in person. The original lawsuit charged that Arbitron’s failure to do so resulted in the disproportionate exclusion of African Americans and Latinos from its ratings panels.

The company also agreed to take “all reasonable measures” to insure that an average 75 percent of the data issued by the New York PPM system for all demographic groups was usable and reportable by April 1. 2009, “and to ensure that subcategories comprising 10 percent or more of the New York Metro population fall within 90 percent of the overall 75 target.”

Arbitron also agreed to strive to obtain accreditation for the New York PPM service from the Media Rating Council, which previously denied accreditation. The state said it reserved the right to revoke the agreement and restart litigation if Arbitron does not receive the MRC’s formal blessing by Oct. 15, 2009, or if it does not achieve the methodological changes agreed to by certain dates.

The company also agreed to pay $200,000 in settlement of the claims and $60,000 for costs. The company will pay $100,000 to the National Association of Black Owned Broadcasters (NABOB) for a joint radio project between NABOB and the Spanish Radio Association to support minority radio.

Arbitron also agreed to fund an advertising campaign in the New York market (of at least $25,000) promoting minority radio and to include a disclaimer on promotional material indicating that PPM ratings are based on audience estimates and should not be relied on for precise accuracy or precise “representativeness” of the New York radio market.

The ratings firm will also conduct a study “to determine and cure measurable bias the PPM methodology may have on racial minorities.” The study is to be completed in July; any biases are to be remedied within six months.

This story updates an earlier item with the news that Arbitron has also agreed to settle the New Jersey lawsuit.
Posted by HighJive at 12:04 AM

Arbitron bites. But then, radio PDs who can't think of a better way to understand listening, and sales managers who stake their station's futures on the quarterly book, need to take some blame. So do media buyers. The whole shooting match needs a re-thinking. What better time than now? (Check HBR for how anthropology, of all things, drives strategic decisions at Intel!)