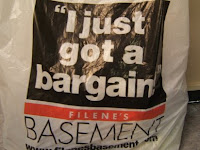 Leaky basements in a MultiCultClassics Monologue…

• Filene’s Basement plans to close a third of its discount fashion stores nationwide. You know things are bad when the bargain basement retailers are bombing.

• Wireless phone maker Ericsson reported a 31 percent drop in 4Q profits, and will now be calling for 5,000 job losses. Ericsson employees are encouraged to not answer their work phones – especially if the caller ID shows it’s the HR director.

• United Airlines reported more losses, along with plans to jettison 1,000 jobs. In an effort to generate profits, the airline will probably raise fees for an extra carry-on bag to $1 million.
Posted by HighJive at 10:56 PM