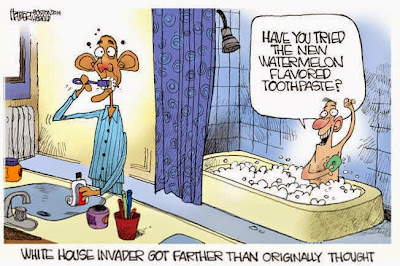 The Boston Herald removed Jerry Holbert’s editorial cartoon and apologizes after storm of critics rip the association of President Obama and watermelon toothpaste as ‘stupid.’

There’s an ink stain on Jerry Holbert’s résumé after the veteran editorial cartoonist for the Boston Herald made a reference featuring President Obama that’s been decried as racist.

The cartoon — “White House invader got farther than originally thought” — shows Obama brushing his teeth in a White House bathroom while an intruder bathes in the tub behind him. The man says: “Have you tried the new watermelon flavored toothpaste?”

“Really? No one notice the racism in this Obama cartoon in the Boston Herald? Really? Everyone else did,” tweeted cartoonist Mike Lynch.

The Herald issued an apology and removed the offensive editorial cartoon from its website Wednesday.

“As Jerry Holbert discussed on Boston Herald Radio this morning, his cartoon satirizing the U.S. Secret Service breach at the White House has offended some people and to them we apologize,” The Herald said in a statement. “His choice of imagery was absolutely not meant to be hurtful. We stand by Jerry, who is a veteran cartoonist with the utmost integrity.”

Holbert is a New Jersey native who received the National Cartoonist Society’s Editorial Cartoon Award in 2000. He took to Boston Herald Radio Wednesday morning and insisted the offensive phrase was not intentional.

“I did the sketch and because it’s calling for a new flavor I thought I’d do something different than spearmint and peppermint,” Holbert said. “I remember my son’s girlfriend bought some toothpaste in the past and left it in the closet upstairs. I went and pulled it out. It’s a kid’s Colgate watermelon flavor. I thought, ‘That would be good.’”

Interestingly, the cartoon syndicate where Holbert’s work also appears reached out Tuesday night and asked him to alter his latest submission. He obliged and in the syndicate version the toothpaste reference is raspberry flavor.

“They said there’s a racial element to it,” Holbert said. “I disagreed to be honest, but I [fixed] it anyway. I didn’t think people thought like this anymore. I didn’t think of it at all when I did the cartoon.”

But the cartoonist never flagged his editors at the Herald.

“I don’t think along the lines of racial jokes, I never do. Naive, stupid those kind of things I understand, but racist I’m definitely not,” Holbert said. “I want to apologize to anyone I offended that was hurt by the cartoon. It was not my intention.”

Back to the drawing board.