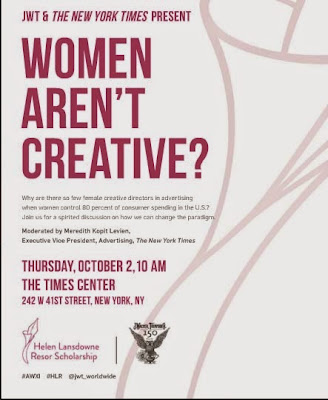 The New York Times advertising columnist Stuart Elliott spotlighted Advertising Week “diversity” discussions that exclusively focused on the industry’s alleged dearth of dames. To be clear, regardless of anything said to the contrary, the talks were really about promoting White women. A panel titled “Women Aren’t Creative?” featured adwomen staging the standard bitch session. Charlotte Beers remarked, “Let’s assume no one’s going to clean up their act,” which Elliott interpreted to mean that the White men in charge shouldn’t be expected to change. But the truth is, Ms. Beers made a safe assumption because industry leaders including Beers have absolutely failed to make good on diversity since at least the 1950s—and there’s no evidence to indicate a revolution will occur anytime soon. Leo Burnett CCO Susan Credle presented the increasingly common clueless comment by saying, “Diversity is necessary to stay relevant. [But] not just women: geographic diversity, racial diversity, religious diversity.” Okay, Credle, let us know when your irrelevant agency delivers on any of those categories. Ironically, White women comprise the only group to experience significant success in regards to increased representation and opportunities in the field. Yet adwomen were the sole “minority” group to receive a soapbox during Advertising Week. How pathetic.

At Ad Week, a Push to Make Diversity a Reality Beyond Conference Discussions

AS has been the case during previous iterations of Advertising Week in New York City, there were several panels, presentations and discussions about diversity during this year’s event, which concluded on Thursday. Still, the debate continues as to whether efforts to make the industry’s work force reflective of America’s changing face are truly a priority for executives or rather something to pay lip service to at annual conferences.

“Today, we still do not have enough women” in creative roles, Laura Agostini, worldwide chief talent officer at JWT, said Thursday morning while introducing a panel that carried the provocative title “Women Aren’t Creative?” The panel, sponsored by JWT, part of WPP, and The New York Times, signaled the formal start of a $250,000 scholarship program financed by JWT and named after a pioneering female copywriter at the agency, Helen Lansdowne Resor. The Resor Scholarship program is intended to nurture female advertising students in Canada, China, India, Japan, the Middle East, South Africa and the United States.

A panelist, Charlotte Beers, said, “Let’s assume no one’s going to clean up their act” — in other words, do not wait for the men in charge to mend their ways. Ms. Beers — a former chairwoman of JWT as well as a former chairwoman and chief executive of a sister agency, Ogilvy & Mather Worldwide — told the women in the audience to “sign up, say ‘I’ll do it,’ step out in front of your PowerPoints” and “learn how to claim your victories.”

She added: “Keep your own scorecard. Write your own approval sheet.”

Another panelist, Maureen Dowd, an Op-Ed columnist at The Times, began her initial remarks by saying, “I’m going to have to say this softly, because I’m in this building,” referring to The Times Center, where the panel was held. She proceeded to read a list of Times columnists using their given names, among them “Nick,” “Joe” and “Frank” — as in Nicholas Kristof, Joe Nocera and Frank Bruni — before concluding, “And then Gail and me,” referring to Gail Collins.

Ms. Dowd also read the audience something that she described as “the most up-to-date, modern advice for women,” which included a need to “develop skin as tough as a rhinoceros hide.” The punch line came when she attributed the advice to Eleanor Roosevelt in 1936.

The panel was one of three that were for or about women on Thursday morning. There were, by one count, four such panels on Wednesday, an Ipsos Girls’ Lounge dinner on Tuesday and a panel on Monday called “Rethinking Marketing to Women” as Advertising Week began. “There’s still real stagnation for women at the top” of the advertising industry, Sheryl Sandberg, chief operating officer of Facebook, said as she moderated the Monday panel.

Among those taking part in a Thursday panel devoted to creative inspiration was one of the highest-ranking female creative executives in advertising, Susan Credle, chief creative officer of Leo Burnett U.S.A. in Chicago, part of the Leo Burnett division of the Publicis Groupe.

After the panel, Ms. Credle said in an interview that she took the position at Burnett because it was important to have women in senior posts “on the creative side” of agencies.

During her panel, Ms. Credle talked about Burnett’s decision last month to join agencies like DDB, FCB and Ogilvy & Mather in a diversity initiative called “No. 2.66,” which refers to the idea that at the rate of hiring as of 2013, “true equality will not be realized in the advertising industry” for another 66 years, according to the initiative’s website.

When recruiting employees, Ms. Credle said, agencies also should seek people from diverse backgrounds with nontraditional types of résumés because “we’re getting the same types of people in advertising” and “we’ll become myopic” if the issue is not addressed.

“It’s why boutiques are doing well,” she added, referring to smaller agencies. “We have to make sure in more traditional shops we have people coming in from different walks of life.” She listed among those poets, artists, actors and designers of skateboards and sneakers.

The interest in women in advertising was not confined this week to those who attended Advertising Week. Adweek.com on Thursday published an article by Nils Leonard, chief creative officer of Grey London, that carried the title “Why the Perfect Modern Creative Is Fierce, Fearless and Female.”

The article began: “The perfect modern creative is a woman. Because we have enough men, and men like it is the way it is right now.” The article ended with Mr. Leonard’s announcement that he was resigning so that a woman could take his post.