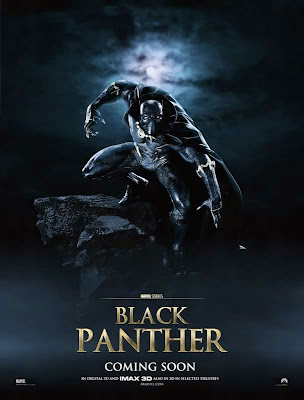 Marvel Unveils an Ambitious Roster of Films, With a Bit of Diversity

LOS ANGELES — It’s Marvel’s world. The rest of Hollywood just lives in it.

Following the release of 10 back-to-back blockbusters — not counting more than a dozen smash hits starring Marvel characters but produced by outside studios — Marvel Entertainment on Tuesday announced a lineup of nine new movies.

Marvel will notably devote entire films to a female character, Captain Marvel, and to an African superhero, the Black Panther.

After revealing the roster of films, which includes a two-part “Avengers: Infinity War,” Kevin Feige, president of Marvel Studios, told a packed El Capitan Theater here, “As you can see, we have a hell of a lot of work to do.”

Shares of the Walt Disney Company, which owns Marvel, climbed nearly 2 percent after the announcement, closing at $89.93. Investors like long-term film-franchise building because it greatly lessens the risk of fluctuations in studio financial results. Wall Street now knows Marvel’s plans through mid-2019.

Marvel’s announcement came two weeks after DC Entertainment, a division of Warner Bros., unveiled its own roster of nine new superhero films. Add the Marvel and DC slates to plans by other studios to keep mining the comic book genre, and Hollywood is on track to deliver 29 superhero movies in the next six years.

Can the marketplace absorb the glut? Some media analysts warn that superhero fatigue is already setting in, but Mr. Feige brushed aside concerns. “If the movies deliver in terms of quality, they will succeed,” he said.

When DC confirmed its slate — single movies will be devoted to Aquaman, Wonder Woman and, in a redo, the Green Lantern — Mr. Feige said Marvel’s reaction was: “Let’s stick to our plan. Let’s do what the audience is telling us we’re doing right.”

Marvel’s 10-movie run, which started in 2008, has been worth $7 billion at the box office; DVDs, TV reruns and merchandise have generated billions of dollars more.

The new Marvel movies for 2016 are “Doctor Strange,” which is expected to star Benedict Cumberbatch, and “Captain America: Civil War,” which will co-star Robert Downey Jr. as Iron Man and introduce Chadwick Boseman as the Black Panther. Following, in 2017, will be “Guardians of the Galaxy 2,” “Thor: Ragnarok” and “Black Panther.”

In 2018, Marvel will release the first of the two “Avengers: Infinity War” movies; “Captain Marvel,” based around a not-yet-cast superheroine named Carol Danvers, who has cosmic powers; and “Inhumans,” a film that Mr. Feige said would introduce “tons” of new characters and is envisioned as “a franchise and perhaps a series of franchises.”

Mr. Feige said a version of Tuesday’s splashy announcement event — taking the stage were Mr. Downey, Chris Evans, who plays Captain America, and Mr. Boseman — was supposed to have happened at Comic-Con International in July. But Marvel decided to wait in part to see how audiences responded to the unknown characters in “Guardians of the Galaxy,” which arrived in August. It now ranks as the year’s No. 1 domestic movie.