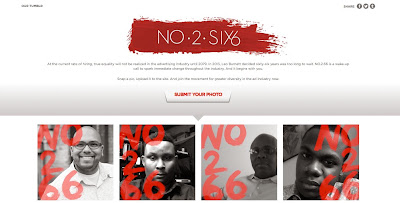 NO.2.66 is sparking a revolution. The site declares:

At the current rate of hiring, true equality will not be realized in the advertising industry until 2079. In 2013, Leo Burnett decided sixty-six years was too long to wait. NO.2.66 is a wake-up call to spark immediate change throughout the industry. And it begins with you.

Snap a pic. Upload it to the site. And join the movement for greater diversity in the ad industry now.

Not sure who arrived at the “true equality” estimate, but 66 years is pretty optimistic. Over the last 60 years, Black representation in the advertising industry has actually declined—and agencies like Leo Burnett are responsible for the reverse slide. So maybe Leo Burnett should clean up its own house before staging a movement. Below is a rebuttal concept for the culturally clueless critters headquartered at 35 West Wacker Drive.

Thank you for calling them out. "Patronizing" is definitely the right word for NO.2.66.

They talk about diversity with stunts like this so that their clients will think they're making an amazing effort, when behind the scenes they're doing nothing. Zilch.

Rounding up all the ethnic interns in the office and prodding them to take photos is not diversity.

The one and only reason they've launched this effort is because two of their clients have recently questioned their cultural cluelessness and started asking to see numbers.