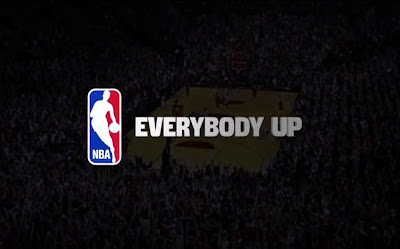 Advertising Age reported on fresh marketing and advertising being developed for the NBA under recently-hired CMO Pam El. A new campaign features the tagline, “Everybody Up.” Fairly certain everybody does not include Donald Sterling, Bruce Levenson or Danny Ferry.

The NBA’s Marketing Will Get More Aggressive Under New CMO

A New Campaign Is Supported by Broad-Based Media Buy

The National Basketball Association, which recently inked a lucrative media rights deal, will increase its marketing budget as it looks to lure more casual fans, according to the league’s new chief marketing officer.

Some of the new spending will back the league’s season-long campaign, which debuts Saturday and will run on a broader set of networks than in years past, said CMO Pam El, who joined the NBA in August after stints at insurance companies State Farm and Nationwide. “We are going to be much more aggressive with our marketing. We want to go after a larger fan base,” she said in an interview.

While she declined to reveal spending figures, she said the new campaign, called “Everybody Up,” will run on news and entertainment networks such as BET, CNN, TBS and VH1 “just to name a few.”

The first ad of the campaign is called “Roll Call” and will first air on Saturday during the Miami Heat vs. Cleveland Cavaliers preseason game that will be played in Rio de Janeiro and air on ESPNews. The ad is by Goodby Silverstein & Partners and features narration by hip hop artist Common.

Previously, the league had mostly confined its early-season campaign to ESPN and TNT, which both carry NBA games, Ms. El said. The league will still air ads on the two networks, but “we are going to branch outside of that media to reach not only the avid fan, but also our casual fan,” she said.

In 2013, the NBA spent $93.6 million on measured media, a figure that includes ads promoting the NBA TV cable channel, as well as plugging the WNBA, according to Kantar Media.

Ms. El’s hiring represents the first time the league has a CMO title since the 1990s. More recently, the league’s top marketing position was filled by Jamie Gallo, who held the title of exec VP-marketing, before he left the NBA in January. “The fact that the league has decided to hire a CMO is a sign of how much more aggressive we want to become as a marketing entity,” Ms. El said.

The league will have plenty of money to spend after its new media rights deal kicks in beginning in the 2016-2017 season. The pact with Walt Disney Co. (ESPN and ABC) and Turner Broadcasting System (TNT) more than doubles the NBA’s current deal and is worth $24 billion over nine years, according to various media reports.

Some analysts have speculated that TV viewers could eventually cover some of the costs through higher cable bills. So it makes sense for the league to try and broaden its fan base via new marketing, said D.J. Koeller, an associate VP at Intersport, a Chicago-based sports and entertainment marketing company.

It’s critical for the NBA to bring the casual fans into the fold “because eventually they may be the ones footing the bill,” Mr. Koeller said. “You want to make sure that everybody has embraced the product if ultimately there is going to be a cost associated with it.”

The “Roll Call” ad includes footage of fans, players, coaches and cheerleaders, while weaving in scenes from foreign markets such as London, China and Mexico City.

“The idea of this spot is that teams win championships, individuals don’t,” Ms. El said. “We are proposing that the team is a combination of the players and the coaches, but also the staff and employees and the fans and the families—and that all of those folks actually contribute to the NBA experience.” The international flavor is meant to emphasize that the “global NBA community is much broader than just the 30 teams here in the U.S. (and Canada),” she added.

A Spanish-language ad by Bromley is in development.

The campaign comes as the NBA is in the early stages of a creative agency review, as Ad Age recently reported. Ms. El declined to comment on the process other than to say Goodby has “done a tremendous job” with the new campaign.

Media planning and buying for the new campaign was handled by Media Storm, which is part of the Water Cooler Group network that is co-led by former Mindshare exec Antony Young. The NBA, which had previously handled media internally, began working with the network last year during the NBA Finals, according to a spokesman.