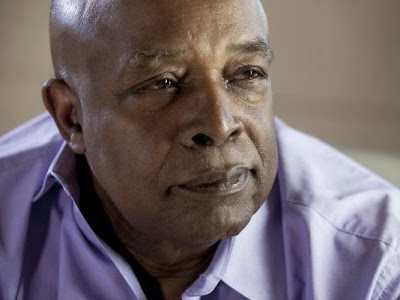 PALO ALTO, Calif. – As a pioneering African-American in the land of tech, Ken Coleman has earned the respect of venture capitalists and the friendship of presidents.

And yet as a black man in America, Coleman shudders when police lights flash.

“When I’m stopped I want to say, ‘I’m not what you think, I’ve got an MBA, I live in Los Altos Hills, I own a home in Maui.’ I want to say that,” says Coleman, 69. “Because I know through experience that person might have an image of what I might be and view me as dangerous. And to not feel that way would be foolish.”

The duality of such an existence would enrage many. But Coleman has guided his personal and professional life with a simple philosophy: “You will experience lots of racism and prejudice. But you can’t look under the bed for it, because then it becomes an obstacle to your success.”

That mantra saw the son of a Centralia, Ill., maid and a heater-factory laborer graduate from Ohio State University and become one of the first African-Americans in Silicon Valley when he joined Hewlett-Packard in the ‘70s as a human resources exec.

Leadership roles at Silicon Graphics followed, where Coleman hired a summer intern by the name of Ben Horowitz, co-founder of VC powerhouse Andreessen Horowitz. The firm recently named Coleman as a special adviser with a mission to both counsel young tech company founders and spearhead a networking effort aimed at increasing the ranks of minorities in tech.

In a blog post noting Coleman’s appointment, Horowitz called Coleman his “personal guardian angel.” But Coleman’s wingspan will need to expand as Silicon Valley grapples with the pressing issue of employee diversity. In recent months, furor over the topic has grown as firms such as Yahoo, Google and Apple divulge staffing numbers with glaring minority under-representation.

USA TODAY’s ongoing coverage of this topic has reported marked pay gaps in tech, where Hispanic, Asian and black programmers often earn $16,000, $8,000 and $4,000 less, respectively, than white counterparts, according to the American Institute for Economic Research.

A recent guest columnist, Charles Hudson, an 18-year Silicon Valley veteran and a partner at SoftTechVC, noted that he is such a rare bird that “I’ve often been confused for everyone from Google’s (chief legal officer) David Drummond to MC Hammer.”

But as one of around 500 leading African-Americans in tech today, Hudson is positively surrounded by peers when compared to Coleman’s debut decades ago. Joining HP after a stint in Korea with the Air Force, where he worked on early computers, Coleman was determined early on to increase the ranks of blacks in tech.

“We had a very aggressive recruiting program (at HP) at the collegiate level, and we did a good job of eliminating the risk concerns many people had,” he says, noting that the advice he still dispenses to any founder who asks is make sure your HR department is staffed by the very minorities you’re trying to recruit.

“Diversity doesn’t happen naturally,” he says. “Social systems, which a company is, want to reproduce themselves. If a founder went to Harvard, they’ll want to replicate that.” He adds that the argument for breaking that habit is dollars and cents.

“I don’t think diversity should be a deficit model,” he says. “It’s an opportunity model. If I know something you don’t know about the marketplace because of my staff, I will beat you. And that’s something every company out there should be concerned about.”

‘DONE WELL BY ANY MEASURE’

Coleman is the first to say he’s “done well by any measure” thanks to his career in tech, which saw him serve as COO of early Web giant Silicon Graphics and today finds him chairman of data analytics firm Saama Technologies. And yet in his mind a notable asterisk accompanies those laurels.

“The real question is, what might I have done or been if I had been white?” he says, not bitterly but rather with his ever-present smile and deep laugh. He recounts how white HP peers were asked to join company boards far earlier than he was.

Coleman’s solution? He accepted the numerous requests that came his way to join non-profit boards eager for diversity, “and then just worked it hard to show people how I could be helpful as an adviser to a company. There was no other option.”

“Ken has been a pioneering figure in Silicon Valley, but what most don’t realize is how many careers he has helped, pulling people up even if they never knew it,” says Price Cobbs, a longtime Coleman friend and corporate consultant who wrote Black Rage, a seminal ‘60s text that followed the assassination of Martin Luther King Jr.

“What Ferguson (the August fury over the death of black teen Michael Brown) reawakened particularly in Ken and my generation is a desire to reconnect with communities we’re no longer in,” says Cobbs.

For Coleman, that means putting a greater emphasis on reading and STEM subjects that are gateways to jobs in the tech industry. Coleman also is quick to stress that “more than 50% of jobs in technology don’t require technology skills,” adding that his current advisor, Pinterest CEO Ben Silberman, has a graphics background.

“Look, he says, “I don’t believe white hiring managers lie in bed thinking of ways not to hire black people. The issue is, most hiring managers are trying to reduce risk. And sometimes your instinct is, ‘You’re different than me, so that’s risky.’ But that’s not the right way to think about things.”

Today, America is a nation of 320 million that is roughly 70% white, 15% Hispanic, 11% African American and 4% Asian. Someday soon, Coleman believes, this country’s technology workforce can and should break down along similar lines, compared to the current 2% of blacks and Hispanics in tech.

“Do I believe this is critical to the country? Yes,” says Coleman. “I know that if the tech companies in this valley put their mind to it, they can put a dent in it. We have some of the smartest minds around. And my avocation is simply to have whatever impact on this issue that I can.”