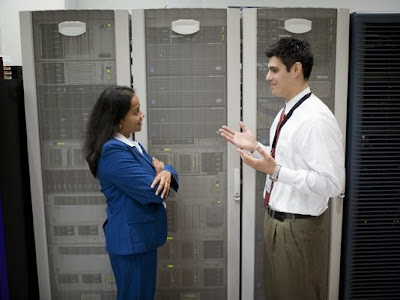 USA TODAY reported on the dearth of digital diversity—that is, the abysmal lack of minorities in technology companies. Sadly, the excuses from the tech industry mirror the bullshit routinely shat out by the ever-exclusive advertising industry. Here are a few of the technological turds:

There’s a severe shortage of qualified Blacks and Latinos in the pool of job applicants. Of course, there’s no recognition that the pool is exclusionary—and little effort is being made to wade outside of the limited pool. There are plenty of available and qualified candidates. You just have to look beyond the routine and stop relying on cronyism, nepotism, racism and other assorted isms.

Blacks and Latinos need more educational opportunities. This leads to the belief that there must be greater connections with inner-city residents and historically Black colleges and universities. Look for tax-exempted internships, scholarships and outreach programs to explode in the years ahead.

Tech companies don’t want to sacrifice quality by hiring Black and Latinos. This is simply arrogance and ignorance at work.

If Silicon Valley continues to follow the lead of Madison Avenue, expect to see more Chief Diversity Officers, Diversity Development Advisory Committees, BrandLab knock-offs, ADCOLOR® donations, examples of delegating diversity and tech executives saying, “We’ve got a long way to go and we’ve got to do better—we’re fucked up!” But don’t expect to see any progress.

Tech jobs: Minorities have degrees, but don’t get hired

Technology companies blame the pool of job applicants for the severe shortage of blacks and Hispanics in Silicon Valley.

But these findings show that claim “does not hold water,” said Darrick Hamilton, professor of economics and urban policy at The New School in New York.

“What do dominant groups say? ‘We tried, we searched but there was nobody qualified.’ If you look at the empirical evidence, that is just not the case,” he said.

As technology becomes a major engine of economic growth in the U.S. economy, tech companies are under growing pressure to diversify their workforces, which are predominantly white, Asian and male. Leaving African-Americans and Hispanics out of that growth increases the divide between haves and have-nots. And the technology industry risks losing touch with the diverse nation — and world — that forms its customer base.

On average, just 2% of technology workers at seven Silicon Valley companies that have released staffing numbers are black. Three percent are Hispanic.

But last year, 4.5% of all new recipients of bachelor’s degrees in computer science or computer engineering from prestigious research universities were African-American and 6.5% were Hispanic, according to data from the Computing Research Association.

The USA TODAY analysis was based on the association’s annual Taulbee Survey, which includes 179 U.S. and Canadian universities that offer Ph.D.s in computer science and computer engineering.

“They’re reporting 2% and 3% and we’re looking at graduation numbers (for African-Americans and Hispanics) that are maybe twice that,” said Stuart Zweben, professor of computer science and engineering at The Ohio State University in Columbus.

“Why are they not getting more of a share of at least the doctoral-granting institutions?” said Zweben, who co-authored the 2013 Taulbee Survey report.

An even larger gulf emerges between Silicon Valley and graduates of all U.S. colleges and universities. A survey by the National Center for Education Statistics showed that blacks and Hispanics each made up about 9% of all 2012 computer science graduates.

LinkedIn issued a statement that it was working with organizations to “address the need for greater diversity to help LinkedIn and the tech industry as a whole.”

Google said on its diversity blog in May that it has “been working with historically black colleges and universities to elevate coursework and attendance in computer science.”

In his blog post on diversity, Apple’s CEO Tim Cook cited improving education as “one of the best ways in which Apple can have a meaningful impact on society. We recently pledged $100 million to President Obama’s ConnectED initiative to bring cutting-edge technologies to economically disadvantaged schools.”

All of the companies have insisted they are hiring all of the qualified black and Hispanic tech workers they can find.

In an interview earlier this year, Facebook Chief Operating Officer Sheryl Sandberg said the key to getting more women and minorities into the technology field had to start with improvements to education.

“We are not going to fix the numbers for under-representation in technology or any industry until we fix our education system,” she said.

Others say tech giants simply don’t see the programmers right in front of them.

Janice Cuny directs the Computer Education program at the National Science Foundation. She says black and Hispanic computer science graduates are invisible to these companies.

“People used to say that there were no women in major orchestras because women didn’t like classical music. Then in the 1970s they changed the way people auditioned so it was blind, the listeners couldn’t see the players auditioning. Now the numbers are much more representative,” she said.

The same thing happens in the tech world, said Cuny. “There are these subtle biases that make you think that some person is not what you’re looking for, even when they are.”

One of the key problems: There are elite computer science departments that graduate larger numbers of African-American and Hispanic students, but they are not the ones where leading companies recruit employees. Stanford, UC Berkeley, Carnegie Mellon, UCLA and MIT are among the most popular for recruiting by tech companies, according to research by Wired magazine.

“That is the major disconnect,” said Juan Gilbert, a professor of computer and information science at the University of Florida in Gainesville.

“The premise that if you want diversity, you have to sacrifice quality, is false,” he said. His department currently has 25 African-American Ph.D. candidates. Rice University in Houston has a large number of Hispanic students.

“These are very strong programs, top ranked places that have excellent reputations,” he said. “Intel has been hiring from my lab and they say our students hit it out of the ballpark.”

Justin Edmund says he was fortunate to attend Carnegie Mellon. Today he’s the seventh employee at Pinterest and one of the top designers at the San Francisco startup valued at $5 billion.

He’s also one of the few African Americans in his company.

“There’s a lot of things that can be done to fix the problem but a lot of them are things that Silicon Valley and technology companies don’t do,” Edmund said. “If you go to the same prestigious universities every single time and every single year to recruit people … then you are going to get the same people over and over again.”