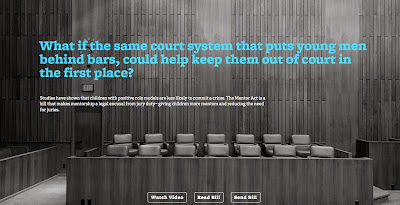 The Mentor Act warrants a closer examination, as advertising people are wont to judge the efforts of peers; plus, the endeavor is tied to the U.S. justice and jury system.

The overall campaign originally launched through a coalition between Esquire magazine and three White advertising agencies. As always, it was likely a well-intentioned and positive initiative, fueled by individuals actively seeking to promote change. The execution, however, raises a few questions.

For starters, does anyone from Esquire or the White agencies actually have any credibility or experience in the area of mentoring? Even a mediocre mentor is familiar with the common knowledge and principles behind the challenges our youth face in today’s world. From Big Brothers Big Sisters of America to UNCF, this ground has been covered—and in far more relevant, effective and provocative ways.

The Mentor Act itself seems a tad far-fetched and misguided. In a nutshell:

We created a bill that gives people who volunteer with an officially recognized mentorship program a legal excusal from jury duty. It’s a fully functional document and all it needs is sponsorship from a state representative to be on its way to becoming an actual law. 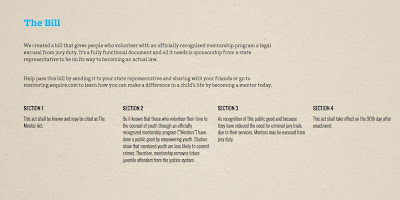 Um, do we really want our youth being mentored by douchebags whose primary motivation for giving back involves avoiding jury duty? 12 Angry Men do not necessarily lead to great mentorship. Does anyone even want such morons serving on a jury? Service is something that must be given freely, responsibly and with personal integrity. Sorry, but jury duty exemptions make it all feel uninspired and cheap.

Again, The Mentor Act is undoubtedly backed by caring people. Yet actions of the heart must also incorporate actions of the head. Right now, this bill needs to be repealed, rethought and rewritten. Ditto the advertising campaign.