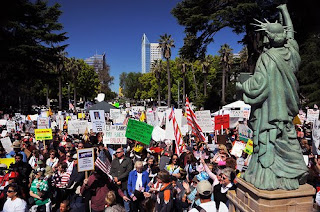 One crucial element of the American subconscious is about to become explicit and highly volatile. It is the realization that a white United States is within thinkable distance of a moment when it will no longer be the majority. This awareness already exists in places like New York and Texas and California, and there have been projections of when different nonwhite populations will collectively outnumber the former white majority. But it also exerts a strong subliminal effect in states like Alaska that have an overwhelming white preponderance.

Until recently, the tendency has been to think of this rather than to speak of it—or to speak of it delicately, lest the hard-won ideal of diversity be imperiled. But nobody with any feeling for the zeitgeist can avoid noticing the symptoms of white unease.

For example, so strong is the moral stature of Martin Luther King Jr. and the civil rights movement that even the white right pretends to emulate it. Thus, I find that it is really quite rare to hear slurs against President Obama that are based purely on the color of his skin.

But it is increasingly common to hear allegations that Obama is foreign-born or a Muslim. And these insinuations are perfectly emblematic of the two main fears of the old majority: that it will be submerged by an influx from beyond the borders and that it will be challenged in its traditional ways and faiths by an alien and largely Third World religion.

This summer, then, has been the perfect register of the new anxiety, beginning with the fracas over Arizona’s immigration law, gaining in intensity with the proposal by some Republicans to amend the 14th Amendment so as to denaturalize “anchor babies,” cresting with the row over the “ground zero” mosque, and culminating with Glenn Beck, a quasi-educated Mormon broadcaster calling for a Christian religious revival from the steps of the Lincoln Memorial.

At the last Tea Party rally I attended, earlier this year at the Washington Monument, I stood behind signs that read: “We left our guns at home—this time” and “We invoke the First Amendment today—the Second Amendment tomorrow.” But Beck’s event was tepid by comparison: a call to sink to the knees rather than rise from them. The overall effect was large, vague, moist and undirected: the “Waterworld” of white self-pity.

The Washington Post quoted Linda Adams, a Beck supporter from Colorado, who said, “We want our country to get back to its original roots.” She also told the paper that “her ancestors were on the Mayflower and fought in the American Revolution.” She was upset that some schools no longer require students to recite the Pledge of Allegiance. Well, the U.S. population is simply not going to be replenished by Puritan pilgrims from England, and the original Pledge of Allegiance was fine with most people as a statement of national unity, until its “original intent” was compromised by a late insertion of the words “under God” in the McCarthyite 1950s. But one still sees what she means and can feel sympathy with the pulse of nostalgia.

In a curious and confused way, some white people are starting almost to think like a minority, even like a persecuted one.

What does it take to believe that Christianity is an endangered religion in the U.S. or that the name of Jesus is insufficiently spoken or appreciated? Who wakes up believing that there is no appreciation for our veterans and our armed forces and that without a noisy speech from former vice presidential candidate Sarah Palin, their sacrifice would be scorned?

It’s not unfair to say that such grievances are purely and simply imaginary, which in turn leads one to ask what the real ones can be. The clue, surely, is furnished by the remainder of the speeches, which deny racial feeling so monotonously and vehemently as to draw attention.

Saturday’s rally was quite largely confined to expressions of pathos and insecurity, voiced in a sickly and pious tone. The emotions that underlay it, however, may not be uttered that way indefinitely.

New York Times Syndicate
Posted by HighJive at 8:28 AM