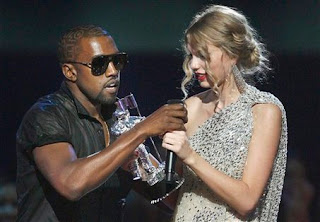 Extending apologies in a MultiCultClassics Monologue…

• Kanye West continues to take personal moral inventory, using Twitter to apologize again to Taylor Swift for interrupting her during MTV’s 2009 Video Music Awards. West also allegedly wrote a song for Swift. Wonder what will happen if it winds up winning an MTV Video Music Award.

• JetBlue Airways officially announced the flight attendant who went nuts and bailed out of a standing plane won’t get his job back. Is anyone really sorry to hear that?