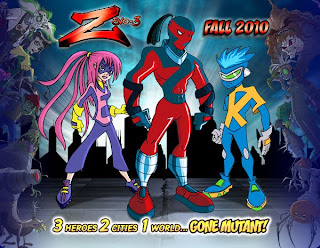 An advocacy organization is stepping up its criticism of a series for children that is scheduled to begin appearing next month on the Nicktoons cable channel. But those involved with the show are defending it.

The Campaign for a Commercial-Free Childhood, based in Boston, filed a complaint about the show with the Federal Communications Commission. The complaint, filed on Tuesday, calls on the commission to prevent Nicktoons from presenting the series because, the organization says, the series is nothing more than a program-length commercial that violates policies regulating children’s television.

The series, called “Zevo-3,” is to feature characters that appear in commercials for Skechers shoes aimed at children. It is to begin appearing on Nicktoons — part of the MTV Networks unit of Viacom — on Oct. 11.

A problem with the show, the organization tells the commission, is that the characters are known to children solely as representatives of Skechers shoes because they have appeared only in Skechers spots, comic books and other marketing materials.

Another problem, the organization says, is that the animated stars of the series — named Elastika, Kewl Breeze and Z-Strap — embody shoe lines, making their very appearance onscreen the equivalent of an ad for those shoes.

The organization likens “Zevo-3” to a children’s show proposed in 1992 that would have been centered on Chester Cheetah, the animated mascot for the Cheetos brand of snacks sold by the Frito-Lay division of PepsiCo. Outcries over that proposal as too commercialized for children’s programming helped kill it.

“It’s clear that Skechers and Nicktoons are flouting the policies established by Congress to protect children from excessive commercialism,” Susan Linn, director of the organization, said in a statement. She described “Zevo-3” as “a 22-minute commercial masquerading as a kids’ TV show.”

“We’ve all worked hard to ensure that we are within the parameters of F.C.C. requirements,” Ms. Van Cott, who is also an executive producer of the series, said in a statement that was e-mailed to reporters.

“While we commend the goals of the Campaign for a Commercial-Free Childhood to watch over the airwaves,” Ms. Van Cott said, the show is worthwhile because it has “strong and positive characters who deal with issues that kids confront on a regular basis, from peer pressure to family relationships.”

David Bittler, a spokesman at MTV Networks, said in an e-mail message: “This show does not violate the Children’s Television Act. We obviously wouldn’t air it if it did.”
Posted by HighJive at 1:19 PM