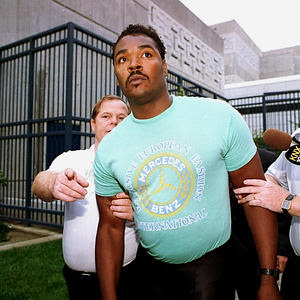 Rodney King to marry juror from his 1991 police brutality trial

Rodney King, the victim of a 1991 beating by Los Angeles police, is set to marry one of the jurors from his controversial civil trial, RadarOnline reported Tuesday.

King, 44, recently proposed to Cynthia Kelley—juror number five—who pushed to award King a $3.8 million payout in a civil case against the city of Los Angeles. “She is a godsend, a blessing in my life,” King told the entertainment website. “I don’t know what I would have done without her in my life … I can’t wait to make her my wife.”

Nineteen years ago, King was chased by police through the San Fernando Valley and was captured on videotape being beaten by four white officers. Their acquittal at a criminal trial sparked the notorious race riots that lasted for four days, leaving 55 dead and more than 2,000 injured.

At the time of the trial both Kelley and King were married but they both later divorced. “Our first date was the next day after the trial when Rodney’s lawyer and Rodney met me in a local pizzeria in Newport Beach,” said Kelley.

The pair separated during King’s stay on VH1’s “Celebrity Rehab With Dr. Drew” and did not reunite until four months ago, when King telephoned to ask if his former love was still single. “We hadn’t spoken to each other for many years, and it just so happened that we reconnected. It was like we were never apart from one another,” Kelley said.

Kelley—who was the only black juror in the case—said, “During deliberations, the other jurors said, ‘Let’s just award him $100,000, you know he’s just gonna blow it anyway.’ It was a blessing that I was even there, the other jurors didn’t want to give him anything.”

King, famous for asking, “Can’t we all just get along?,” told the website the couple is yet to set a date for their nuptials.
Posted by HighJive at 10:52 PM