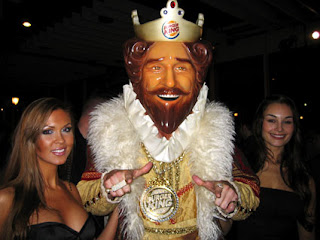 Speculation and hearsay in a MultiCultClassics Monologue…

• Rumors indicate Burger King is for sale. “In fiscal year 2010, we faced sustained levels of high unemployment and a fragile global economy that combined made this one of the toughest operating environments in recent history,” declared Burger King Chairman and CEO John Chidsey. A sale could lead to a major Whopper Freakout.

• Rumors indicate Wesley Snipes has hired private investigators to stalk the wife of Ponzi schemer Ken Starr, hoping to find evidence to clear the actor of tax charges. Sounds like a twist on O.J. Simpson vowing to hunt down Nicole’s killers.

• It’s no rumor—T.I. and his wife were arrested on drug charges. Perhaps the ex-con-rapper-actor is starting some sort of prison family plan.
Posted by HighJive at 12:02 AM