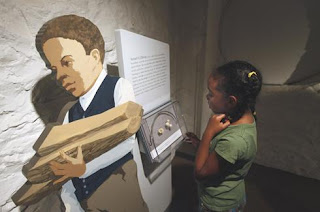 Charlottesville, Va. — Thomas Jefferson’s clothes and linens didn’t get pressed on their own, and the meals for his lavish parties didn’t cook themselves.

Now, Jefferson’s estate, Monticello, is expanding efforts to depict the lives and activities of the people who worked behind the scenes, allowing visitors to see that Jefferson had a lot of support for his achievements. Other sites have been undertaking similar updates — and in doing so, they’re providing a more complete depiction of history.

Curators at the third president’s mountaintop home have been using Jefferson’s detailed journals, archaeological finds and other research to expand Monticello’s stories beyond the great man and his achievements. They are also speaking to a wider audience that includes a growing number of black visitors and other minorities, said Leni Sorensen, African American research historian at Monticello.

“It isn’t that (visitors) aren’t interested in Jefferson. They are, and they want to see how was he allowed to live the way he lived — who was behind that work,” Sorensen said. “They’ll see that competent, skilled enslaved people did the work and helped make it happen.”

A new permanent exhibit that opened in June in Monticello’s cellar depicts a place where slaves who worked as cooks, housemaids and others worked together and crossed paths with Jefferson family members, visitors’ servants and others. Called “Crossroads,” the exhibit includes life-sized figures of Jefferson’s enslaved butler Burwell Colbert, Jefferson’s daughter Martha, teenage house servant Israel Gillette and others next to artifacts found during archaeological research — such as thimbles, clothing irons and shoe buckles.

Ford Bell, president of the American Association of Museums, said that historic sites and museums are now reflecting a more multicultural approach, turning away from the “great man theory” that spotlighted only the achievements of Jefferson and other historic figures.

“The true story is the telling of millions of individual stories of all Americans,” Bell said. “It’s truly about diverse cultural and ethnic groups that came together to create our country, and many of them were reviled or subjugated.”

Updating history could also help attendance. The nation’s demographics are changing, but core museum visitors are still largely white, Bell said. To draw more diverse visitors, museums are offering stories that resonate with visitors of many backgrounds, including people from ethnic or religious minorities, he said.

In Richmond, the American Civil War Center at Historic Tredegar was among the first to tell the story of the war from Union, Confederate, and African-American perspectives. Opened in 2006 at the site of the Tredegar gun foundry, the center allows visitors to see the war’s legacy, and to examine similar contemporary issues — including opposition to immigration and the increase in states’-rights rhetoric, said center President Christy Coleman.

The Hermitage, the Tennessee plantation home of President Andrew Jackson, has updated its introduction film and opened a gallery exhibit that includes the Indian Removal Act that Jackson pushed for and signed into law in 1830. The measure led to the forced westward migration of thousands of Native Americans from five Southeast tribes to make way for white settlers and slavery.

Some visitors have thought the presentation portrays Jackson as evil, or that Indian removal shouldn’t be discussed because it’s a black mark on the seventh president’s legacy. But Marsha Mullin, The Hermitage’s vice president for museum services, says it’s important to present a fuller look at Jacksonian America.

“It’s an era people don’t know much about, between the Revolutionary War and the Civil War,” Mullin said. “We need to paint the picture in between so they know why the Civil War came along.”

One project has been to create new exhibits at Chimborazo, site of the Confederacy’s largest wartime hospital. Highlighted is the role of Southern women and slaves who tended to wounded soldiers, marking the introduction of women to the male-dominated nursing profession.

History and military buffs, of course, will still be able to immerse themselves in the battles and wartime strategy, Ruth said, but the war’s bigger picture becomes clearer when it includes more depictions of real people’s lives during that time.

“My sense is that by including a more complete context, we’re going to be more relevant to a larger audience,” he said. “With a larger audience coming to our site, there’s no question there’s an economic impact in local areas by having more reasons for people to come.”
Posted by HighJive at 3:09 PM