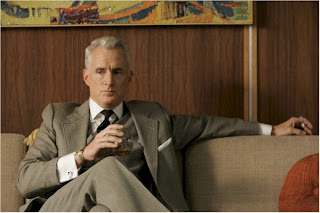 AMC series Mad Men has become an experimental lab of sorts for advertisers and advertising agencies. From the corny factoids preceding commercials to Unilever’s inane series starring Tad and Phil to contextual product placement, it seems like everyone wants to create “breakthrough” concepts and tactics for hawking shit on the show.

However, there are two particularly offensive “advertisers” taking advantage of matters.

Big Tobacco is receiving serious primetime play, despite being prohibited from advertising on television. Lucky Strike is a client at Sterling Cooper Draper Pryce, and characters puff with reckless abandon. It’s no secret that tobacco companies covertly benefit from movies and programs where characters smoke cigarettes. In fact, the anti-smoking Truth campaign once sought to call out movie production studios for essentially advertising cigarettes via such maneuvers.

Liquor companies comprise the second body to benefit from Mad Men. Networks have strict guidelines for advertising booze—right down to prohibiting the depiction of anyone actually drinking. On Mad Men, the characters guzzle freely and constantly. Additionally, the program hypes its Cocktail Culture iPhone app, and the official website features a 1960s Cocktails page. Hell, characters even denigrate Alcoholics Anonymous.

Mad Men goes beyond promoting cigarettes and liquor—the show glamorizes the products better than any deliberate advertising campaign could hope to do. What makes this all incredibly disturbing is the realization that smoking and drinking have led to so many problems and deaths among the ranks of Madison Avenue.

But as always, finding ways to work around the rules has forever been a welcome challenge for the average ad executive.
Posted by HighJive at 12:12 AM

I find that the excessive smoking and drinking is almost comic. EVERYONE is smoking ALL THE TIME. The guys drink as soon as they walk into the office in the morning. It's like they are foreshadowing the problems of each. And we've seen numerous examples where characters suffer blackouts, humiliate themselves publicly and disappoint their families. Not that glamorous.

Yeah, but Draper’s alcoholism really only surfaced in this season. It’s not like Leaving Las Vegas or Crazy Heart—across the board, Mad Men makes drinking sexy. Additionally, the alcohol glamorization happens mostly with the website, as well as the iPhone app—which is actually hyped with promotional messaging that essentially constitute TV spots. The glamorization of drinking and smoking is happening on a more subconscious or subliminal level.