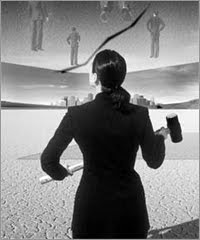 The AdweekMedia Real Time Advertising Week coverage spotlighted a panel of adwomen declaring the glass ceiling is no longer a problem. Um, has anyone tallied the number of female creative directors lately? Or minority females? Sorry, ladies, but the spirit of Peggy Olson is alive and well on Madison Avenue.

Is the glass ceiling a thing of the past?

The glass ceiling is no longer a problem for most women. Or so a panel of leading female media and marketing executives say. That was the general sentiment at “Beyond The Glass Ceiling,” an Advertising Week event devoted to the topic. The high-powered panel featured moderator Lori Senecal, president and CEO of ad agency Kirshenbaum Bond Senecal + Partners; Kenetta Bailey, svp of marketing at WE tv; Robin Domeniconi, svp and chief brand officer of Elle; Jodi Kahn, evp at iVillage Network; and Susan Malfa, svp of ad sales at Bravo & Oxygen media networks.

“The glass ceiling is more of a thing of the past,” Senecal said in her opening remarks. “It’s not something we are experiencing [as much] as we did a few years ago.” In some cases, younger females haven’t even heard of the term. Senecal recalled a particular case when someone said to her: “A glass ceiling? You mean, [as in] a skylight?” “It has a whole new meaning for the next generation,” Senecal said. “There are a lot of signs that it is time to leave this notion of a glass ceiling in the past.”

The women on the panel certainly haven’t fallen short of their goals. Kahn, for instance, was charged with reinventing NBC Universal’s formerly laggard iVillage women’s brand. A year later, the site—a hub for bloggers and those looking to connect with other women—has relaunched several new verticals, notched more new advertisers and is now looking to position itself as the leading women’s online destination brand. Bailey, meanwhile, helped spearhead one of Wedding Central’s most successful campaigns, including one for the TV show Bridezillas.

And there is broader evidence of women’s rising consumer and spending power. Women now hold a majority of the nation’s jobs—the first time this has ever happened—and they’re now the “most powerful consumer group, with spending power of over $5 trillion today,” Senecal said. “The real story is looking beyond the glass ceiling and acknowledging the power women have today as [the most] influential [group of] consumers,” she said.

And today’s high-charged, career-driven females also possess a civic-minded spirit. Just look to Pepsi’s Refresh Project, said Bailey, an alumna of the consumer products company. Not only that, but women today are highly involved and active engagers in the fast-growing digital space. “[We’re] in a digital deluge. A lot of brands are dipping their toes in. But there is no more toe-dipping. We need to jump in,” she concluded.

Update: Based on the comments being posted at Adweek, not everyone agrees the glass ceiling is a thing of the past.
Posted by HighJive at 10:59 AM