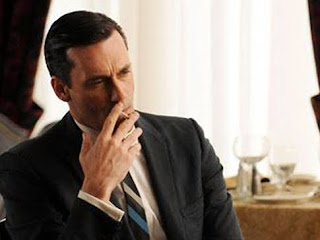 Don’t do the Don: Draper of TV’s ‘Mad Men’ would be a real-life work wash-out

Don’t think of Don Draper as a role model for success at work.

Managers who act like the brash, aggressive and controlling star of “Mad Men” tend to be workplace failures, according to a study reported in The Telegraph.

Behaving like the testosterone-fueled Draper does – always shouting orders and making other employees miserable – can often mean a person is hiding serious self-doubts, according to the research, led by Professor Maurice Levi of the University of British Columbia’s School of Business.

The study showed that CEOs with the highest testosterone levels also were associated with the top rates of hostile takeover bids as well as dropped deals. In short, they’re boardroom disasters.

High hormone levels go hand in hand with a lack of patience, causing Draper types to summarily reject offers, not try to negotiate for more attractive terms for a deal, and strive for things they don’t even need.

Generally, these tend to be youthful executives. When their behavior leads to a deal drying up, an aggressive takeover bid is likely to result.

Levi, whose study was published in Management Science, said men with heightened testosterone levels pursued “things that give them the most dominance, but do not give them the most value.” He added, “We find a strong association between male CEOs being young and their withdrawal rate of initiated mergers and acquisitions.”

More youthful CEOs are 4% more likely to initiate a takeover bid than more seasoned bosses, the researchers found, and they were 20% more likely to reject a takeover offer. The average CEO age of the men surveyed was 56, and those categorized as young were under 45.

Variables, such as a lack of experience on the part of younger men, was taken into account when calculating the findings, which could be construed as a red flag to macho men like Draper.

The study didn’t touch on how a Draper type’s risk-taking behavior and brusque manner might affect a guy’s love life. But if they act around women the way Draper does this season on “Mad Men,” it can’t be anything but dismal.

Leaders who act like Don Draper tend to be professional failures. And Draper is modeled after the standard White male creative director. This explains a lot about the current state of affairs on Madison Avenue, where so many big agencies are in death spirals. Although in our industry, Mad Men can be total washouts and still manage to bounce from one firm to the next.
Posted by HighJive at 9:36 PM