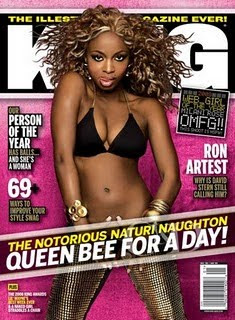 Lane Pryce, following in the footsteps of former regular character Paul Kinsey, has jungle fever. Pryce, his father and Don Draper visited the Playboy Club, and the Brit immediately connected with a Black woman—gushing that she was the finest waitress around. It was later revealed that Pryce is having an affair with his “Chocolate Bunny,” professing to be in love with her. She appeared to feel the same about her sugar daddy.

Creator Matthew Weiner probably thinks he’s being provocative and realistic with the new character. But in the end, Weiner is simply pushing Black female stereotypes that continue today. In the world of AMC series Mad Men—and Madison Avenue—Black women are servants or sex objects.
Posted by HighJive at 12:07 AM

You're right on the money. Weiner should bring in Julia the first black nurse five years early or maybe someone is dating a young Angela Davis. Are you nuts? What do you want the show to be? Fake? This is a segregated society. the only place black and white are not interacting as stereotypes back then was in the Army. But it was mostly black. I know. I was there. Good luck with your politically correct agenda. Go watch bulloney shows like "American dreams". You can get the "whitewash" you so desperately desire in your historical revisionism.

How often does a black character enter into these television story lines as a miscreant or stripper/hooker/criminal/handicapped/ne'er-do-well and then become more civilized or tamed by proximity to their new white counterparts.

I saw this coming a mile away and I can probably guess how it's going to play out. Because it is the same M.O. as so many other TV dramas.

Same old character arc, can't a black person just graduate from college and get a job on TV before the drama commences.