7937: Sweeping References Under The Rug. 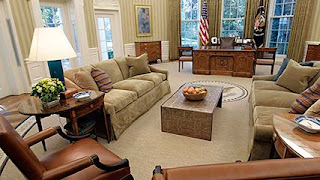 What the Oval Office rug says about America

If rugs could talk, what would they say? For some, one new and famous rug speaks volumes.

As the Oval Office was remodeled during one of Obama’s many vacations, a rug was placed on the floor with much hoopla. It is around rug inscribed with Obama’s favorite quotes. Historical sayings that are meaningful to a constitutional scholar and one of the most brilliant minds of all history surely mean something to those who are graced by his rule. They should.

The rug contains quotations from Abraham Lincoln and American progressive presidents from the 1900’s and a quote by Martin Luther King: or so the great leader thought. The quotation came from a man who died an entire century before King’s civil rights effort. This was a man King admired, held in high esteem and he credited the quote to its proper source: Theodore Parker.

Parker was a Boston minister who worked against slavery, but did not live to see the Republican President Lincoln end. In short, Parker inspired many who followed him, only to have his historical quote misattributed in what some believe is the greatest office in the world.

Lessons taught by the rug may include the folly of ignorance: someone so arrogant and so self aggrandizing that he has no need to check the accuracy of anything he says. Some point to the many speeches Obama has made to suggest that he either does not know history, does not understand history, or desires to rewrite history. Perhaps the flippancy with which a historical quote would be emblazoned inside the Oval Office is a subtle indication that those people may be right: those who care nothing for the accurate preservation of history probably don’t care who said what in the past.

Perhaps the flagrant error presented by the Oval Office rug is indicative of more than just the man who listed the quotations as his favorites. Perhaps it reflects what some would call the modern American apathy that causes Americans not to care what is said as long as it sounds good. With such an attitude, the case could be made that facts don’t matter very much. Books, newspapers, radio, television, and the Internet are replete with those correcting what Obama has said with facts, yet neither Obama nor much of the American public seem concerned with either correcting erroneous statements or making an effort to improve accuracy.

Maybe the rug speaks of the state of American education. After all, the error in the rug went unnoticed for almost a week before being exposed. Is there no historian that knows of Theodore Parker? Out of the hundreds of millions of people in this country, there was not one who immediately spoke out about the error?

The rug should have long ago been carried out of the Oval Office in shame, yet it remains a testimony to what may be systemic problems in American culture.

If the rug is removed for rework, perhaps it should be replaced with another frequently misattributed quote, one that Americans need to know: “Those who cannot remember the past are condemned to repeat it (George Santayana).
Posted by HighJive at 12:28 PM