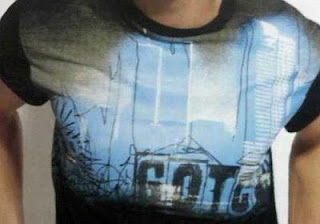 • Sears yanked a t-shirt from shelves after noticing it featured “Gotcha” over an image of the World Trade Center’s Twin Towers. A spokesperson for the Gotcha apparel company said, “We deeply regret that one of our products has upset consumers. We are very sensitive to our customers’ concerns, and are working diligently to remove the product from stores nationwide.” The gear will soon be gone like, well, the WTC Twin Towers.

• Michaele Salahi revealed she has Multiple Sclerosis, claiming she’s kept it a secret partly to avoid being pitied. Actually, most people think she’s pitiful for crashing a White House dinner without an invite.

• A new study from University of Pennsylvania economists showed Blacks are happier than ever. According to the report, Blacks indicating they are not too happy has dropped significantly, to roughly 20 percent in surveys over the past 10 years, from 24 percent in the 1970s. Um, isn’t this like celebrating there are more Blacks working on Madison Avenue today than ever before?
Posted by HighJive at 10:30 PM