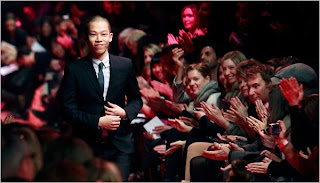 The mood was set early at the American fashion awards ceremony at Lincoln Center in June, an event often likened to the Oscars of the fashion world, with a guest list that included celebrities like Sarah Jessica Parker and Gwyneth Paltrow and almost every top designer.

In quick succession, three men were called to the stage to accept their awards as the best new designers of the year: Richard Chai for men’s wear, Jason Wu for women’s wear and Alexander Wang for accessories.

It was the first time that all three prizes given by the Council of Fashion Designers of America were awarded to designers who are Asian-American. That same night, the fashion council announced three scholarships, each for $25,000, won by student designers of Asian heritage.

“It’s so exciting,” said Mr. Wu, who became a household name not only in this country, but also in his native Taiwan, when his dress was selected by Michelle Obama for her husband’s inauguration. “Not too long ago, Donna Karan and Michael Kors were the young designers of America. Now there are a lot of firsts for all of us as Asian-American designers.”

Their ascent to the top tier of New York fashion represents an important demographic shift on Seventh Avenue. At the Fashion Week that begins here on Thursday, many of the most promising new designers are of Asian descent, a group that includes Mr. Wang and Mr. Wu; Thakoon Panichgul, one of the stars of the documentary “The September Issue,” about Vogue magazine; Prabal Gurung; Phillip Lim; and Derek Lam — names that are increasingly likely to represent the future of fashion.

Major design schools around the world have seen an influx of Asian-American and Asian-born students since the 1990s, partly through their own recruitment efforts in countries with rapidly developing fashion industries, like South Korea and Japan, and partly because of changing attitudes in those countries about fashion careers. At Parsons the New School for Design, roughly 70 percent of its international students enrolled in the school of fashion now come from Asia, according to school officials. At the Fashion Institute of Technology, 23 percent of the nearly 1,200 students now enrolled are either Asian or Asian-American.

“F.I.T. is a pretty diverse place, but this is the most obvious change we have seen,” said Joanne Arbuckle, the dean of its school of art and design. “It is remarkable when you compare it to many years ago. I don’t think we ever had these numbers of students from Asian countries or Asian-American students. And it is a growing population.”

The rise of Asian designers in America has actually come in several smaller waves, including one that marked the emergence of Anna Sui and Vera Wang in the 1980s. In the last few years, however, as a new generation of designers has asserted itself in New York, Asian-Americans have been at the forefront. In 1995, there were only about 10 Asian-American members of the Council of Fashion Designers of America. Today there are at least 35.

This has happened largely for the same reason that the New York fashion industry, through the ’80s, was populated most visibly by designers of Jewish heritage, like Calvin Klein, Ms. Karan, Ralph Lauren, Marc Jacobs and Mr. Kors. Throughout the 20th century, generations of Jewish immigrants had created a thriving garment district in New York, first as laborers, then as factory owners, manufacturers, retailers and, eventually, as designers. Many of today’s Asian-American designers say they experienced a similar evolution from the factory to the catwalk, since some of their parents and grandparents were once involved in the production of clothes.

Read the full story here.
Posted by HighJive at 1:35 PM