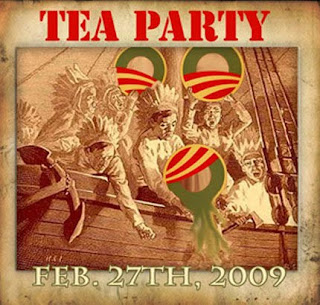 Taking the day off with a MultiCultClassics Monologue…

• The NAACP and other liberal organizations have launched Teapartytracker.org to monitor “racism and other forms of extremism within the Tea Party movement.” The Website goes on to announce, “We call on the Tea Party to repudiate extremists among their ranks and join in civil dialogue with all Americans.” If Website workers are being paid, the project could reverse unemployment figures.

• Borders reported 2Q losses, with revenue falling 12 percent. The bookseller announced plans to add a wider range of merchandise to boost sales. Hmmm… sales are down, so the solution is to sell more stuff? Meanwhile, Barnes & Noble posted a 1Q loss on legal expenses related to fighting the takeover attempts of a major shareholder. These guys should spend more time in the business books section learning about the fundamentals of sales and marketing.

• News reports are clarifying that JetBlue Airways did not fire the flight attendant who went nuts and bailed out of a standing airplane. The flight attendant’s lawyer announced that his client resigned. Somebody should push the moron and his lawyer out of a flying jet.
Posted by HighJive at 1:45 PM