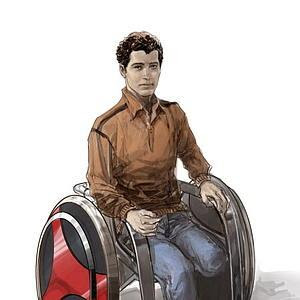 Comic-book fans will soon be getting their first glimpse at an unlikely new superhero—a Muslim boy with superpowers in a wheelchair.

The Silver Scorpion is the brainchild of a group of disabled young Americans and Syrians who were brought together last month in Damascus by the Open Hands Initiative, a nonprofit organization founded by US philanthropist and businessman Jay T. Snyder.

An early sketch shows a Muslim boy who lost his legs in a land-mine accident and discovers he has the power to control metal with his mind.

Sharad Devarajan, co-founder and CEO of Liquid Comics, which is now turning the young people’s ideas into pictures and a story line, said the goal is to release the first comic book in early November in both Arabic and English.

Snyder says he was inspired by President Obama’s effort to reach out to the Muslim world in his January 2009 inaugural address. Last month, Snyder flew 12 disabled Americans to Damascus to meet their Syrian peers, and one of their main goals was to come up with ideas and story lines for the new superhero.

“The only limit was the imagination these kids had—the opportunity for a great story,” said Snyder. “They helped create something by their combined talents, and that becomes a gift to the world.”
Posted by HighJive at 8:22 AM

Email ThisBlogThis!Share to TwitterShare to FacebookShare to Pinterest
Labels: muslim