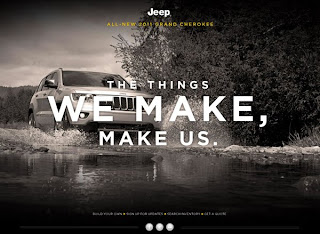 Wieden + Kennedy recently launched a new campaign for the 2011 Jeep Grand Cherokee featuring the tagline, “The things we make, make us,” along with the following commercial mantra:

The things that make us Americans are the things we make. This has always been a nation of builders. Craftsmen. Men and women for whom straight stitches and clean welds were matters of personal pride. They made the skyscrapers and the cotton gins. Colt revolvers. Jeep 4X4’s. These things make us who we are.
As a people, we do well when we make good things, and not so well when we don’t. The good news is this can be put right. We just have to do it. And so we did. This, our newest son, was imagined, drawn, carved, stamped, hewn and forged here in America. It is well made and it is designed to work. This was once a country where people made things. Beautiful things. And so it is again.

As others have pointed out, the message feels exclusive, depicting historical footage that seemingly ignores the contributions minorities have made in the building of America. Not sure if Jeep’s minority agencies agreed, but the print ads targeting Latinos and Blacks indicate someone noticed the erasure of real American history. However, the minority work feels forced, with copy like, “For a lineage as rich as yours…” The tagline reads, “Greatness isn’t just built, it’s earned.” Not too patronizing. It’s just a matter of time before Jeep produces a Black Inventors ad. 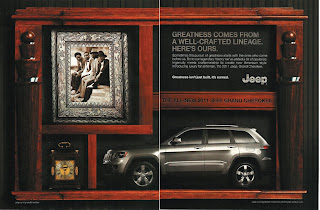 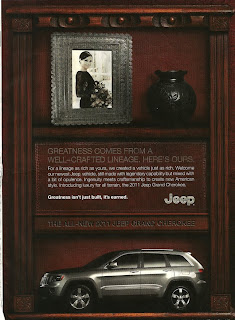