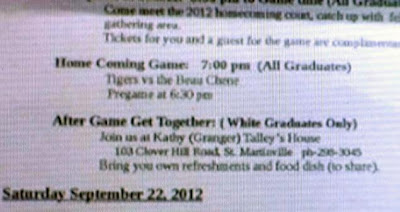 Party organizers insist homecoming after-party was meant to break tradition and include everyone. Graduates of school say there’s been an ongoing issue with segregation.

Louisiana high school grads wanted to break from tradition this year and hold a homecoming after-party for members of the Class of 1973 that wasn’t segregated based on race.

But instead of coming together at St. Martinville Senior High School in St. Martinville, the invitation inadvertently mentioned the event was for “white graduates only” — a shocking display of 21st century divide.

“This year, 2012, was going to be the first year that we were going to integrate it,” Liza Chance, one of the organizers, told ABC affiliate KATC in Lafayette.

“I don’t understand why this went the way it did,” she added.

According to ABC News, someone sent out the invite based on last year’s wording without changing it to include everyone.

The letter runs down the events for Sept. 21: A 5:30 p.m. reception; the 7 p.m. homecoming football game; and an “after game get together: (white graduates only).”

“Bring your own refreshments and food dish (to share),” the invite adds.

The letter also mentions a party the next evening for “all graduates” of the Class of ‘73.

Michael Kreamer, principal of St. Martinville Senior High School, said he began receiving calls about the letter Friday, but told KATC the school was not involved with the invite.

“I’m just a little disappointed that something like this comes up,” he said. “I don’t think that it looks good for the school but … it has nothing to do with St. Martinville Senior High. So I hope people don’t take that the wrong way.”

Facebook users described how the high school has had segregated activities in the past, but younger generations have been trying to change that.

“If you are not from this area, most people do not understand the segregation that took place and is still taking place,” wrote a Facebook user saying she graduated in 2001, “however we have to look at the positive in this reunion, they want to come together as one.”