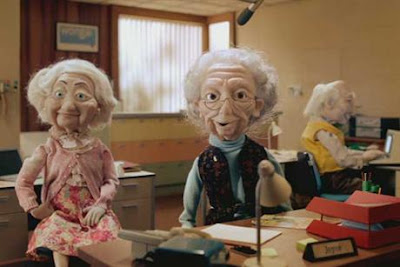 Campaign questioned the ethics of advertising agencies servicing payday lenders. Really? An industry that doesn’t hesitate to hype cigarettes, credit cards, liquor, pharmaceuticals, skin lightening products, junk food, politicians and an endless host of controversial crap is wringing its hands over payday loans? Hell, CashCall extended Gary Coleman’s career in the United States. Besides, the typical adman would sell his own mother if there was a chance to nab decent billings—or an award.

Is it unethical for shops to work with them and should there be an ad ban altogether, John Tylee asks.

With advertising cash to flash, payday loan companies such as Wonga.com and TxtLoan are in the process of finding out whether money can buy them love.

TxtLoan has signalled its intention to rival Wonga.com’s pensioner puppets with the appointment of VCCP and MediaVest to share duties on a £15 million campaign that is bound to fuel the debate about the ethics of what such companies do — and whether adland should be helping them do it.

They certainly polarise opinion. One high-profile critic, the Labour MP Stella Creasy, this week called on agencies to refuse to work with short-term loan companies until they clean up their acts.

Others, though, claim Wonga.com and its rivals herald a new era in financial services and fill a void left by high-street banks that have stopped lending.

So far, there has been very little to cause agencies much angst. The Advertising Standards Authority has fielded a modest number of complaints against four short-term loan companies so far this year. Among them was Wonga.com, whose TV campaign attracted 82 claims that the company did not state an APR. The ASA threw out the complaints.

“So far, we’ve found this advertising generally to have been decent, legal, honest and truthful,” James Best, the chairman of the rule-making Committee of Advertising Practice, reports.

Even Credit Action, the money education charity, which previously complained to the Office of Fair Trading about online activities by payday lenders, is not in favour of an ad ban.

This may explain why agencies have not felt the need to examine their consciences before taking on a Wonga.com-type client. Nicola Mendelsohn, Karmarama’s executive chairman, says she would not want one — but only because of the limited creative possibilities.

“If Wonga.com and the others can get their models right, then the financial services sector is going to become much more dynamic,” a leading ad industry figure says. “And that has to be good news for agencies.”

Some communication experts believe short-term loan companies have made it harder for themselves by not running a PR campaign addressing contentious issues and directed at opinion-formers before running significant amounts of above-the-line advertising.

They claim such a campaign would have made it easier to see off government threats to crack down on payday loans after an investigation by the OFT that remains ongoing.

Damian Collins, the former M&C Saatchi executive turned Tory MP, says: “Payday loans are among the most expensive ways of borrowing. Too much of the advertising suggests it’s cheap money.”

A major problem for payday loan companies is that they must comply with financial codes drawn up in a different era and under different circumstances.

“These companies are generally lending small amounts of money over short periods,” an observer explains. “In that situation, APRs of 4,000 per cent are meaningless.”

The results of the OFT probe could be the catalyst for a legitimised short-term loans sector, according to insiders, and could lead to a shake-out and a market dominated by a few respected players.

“Short-term loan companies are a sign of the times,” an agency chief who knows the sector explains. “They don’t lend massive amounts of money — usually no more than £500 — but there is an extraordinary demand for them.”

Best believes such companies have brought payday loans off the streets and away from intimidating loan sharks “whose techniques have been known to involve a blunt instrument”.

“Short-term loans are a product category that some people feel uncomfortable about, so they will try to use advertising as a stick with which to beat it. However, such advertising is not only strictly regulated but, so far, has been pretty unobjectionable.

“Our codes are closely aligned with the Financial Services Authority rules, and if there was evidence that people were being misled or that vulnerable groups were being targeted, then action would be taken.

“Although the jury is still out, nothing has happened so far to suggest that the rules are being flouted.”

“Agencies approached by short-term loan companies should refuse to work with them until they get their acts together. I’m hearing from people all over the country who are struggling to repay such loans and agencies who run this advertising must be held equally responsible.

“I’m not in favour of an ad ban, although I do think the current advertising makes it very difficult for people to work out what a loan is going to cost them.

“More important is that the OFT starts to regulate these companies more effectively, cost caps are imposed and people get the same protection as their counterparts in many other countries.”

“Banning all advertising by short-term loan companies would not be helpful in terms of enabling individuals to make informed choices.

“A far more sensible approach would be to ensure such advertising doesn’t target vulnerable groups such as people on benefits and students.

“It’s vitally important that ads for payday loans should make it absolutely clear what is being offered. People need to know what they are going to be charged when they take a loan, how long they will have to pay back the money and what will happen to them if they fail to do so.”

“Agencies will decide for themselves if they wish to take business from short-term loan companies, and most will make a judgment on a case-by-case basis. No agency is going to force staff to work on such business if they have strong objections.

“That said, it’s also true that the UK has one of the most stringent self-regulatory advertising codes in the world.

“At present, there is nothing to stop agencies taking such business if it makes commercial sense. The IPA would only need to re-examine the situation if the guidelines changed.”

Payday loan lenders using advertising agencies to spread the word about their business is a new trend.
With some people objecting to it and some others opposing it, it might be a matter of debate but the power of advertising cannot be denied at all.
And some regulations must be put in place to check the side effects of this association.