The retailer’s ‘Morris Babydoll Mesh & Lace’ outfit was offered by a 3rd party in its site’s Marketplace section.

The retail giant has landed in hot water after its website featured an explicit photo of a woman wearing a sheer slip that gave consumers a bit of a peep show.

Sears quickly took down the “Morris Babydoll Mesh & Lace” product and picture, which revealed the model’s nipples, after Reddit users called attention to the racy image.

The product was offered for a cool $25.25, according to Gawker, through the website’s Marketplace section, which Sears describes as “a community of sellers,” meaning that the store allows third-parties to post products and photos to their site.

In this case, a retail company known as “Fright Depot,” which boasts an array of “sexy clothing,” separated by categories like “Cave Girl” and “Pirate,” is responsible for the photo.

Some Reddit users didn’t seem too offended by the image.

“I f---ing hate it when they airbrush out the nipples. I accidentally bought something that was see-through for my girlfriend and she was less than amused and did not believe it was an accident,” one user wrote.

Another added, “I always have to wonder why we think nudity is such a big deal. It really just goes over my head as to why (specifically in the US) we are cool with graphic depictions of death and torture (eg Saw) but a video of with two people having sex is totally unacceptable.”

This is not the first time Sears has been under fire for having explicit content on its website.

“The terms on our Marketplace prohibit images from displaying nudity and see-through clothing. Most often, we see third-party sellers blocking out the nudity in the images,” Sears spokesperson Tom Aiello told Forbes at the time.

It remains unclear how often these audits are performed as Sears did not return requests for comment to the Daily News as of Wednesday evening. 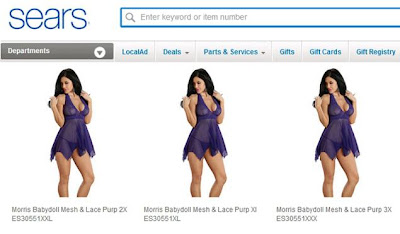