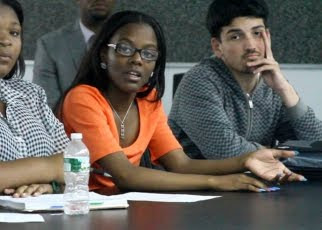 Advertising Age announced the Innovation in Advertising and Media High School (IAM) picked up a paying account via a story titled, “Agency Run By High-School Students Wins Its First Client.” Meanwhile, agencies run by adult Blacks struggle to stay afloat and/or must continue to plead with advertisers to take them seriously—while the White shops practice Corporate Cultural Collusion to stay in power. Is there a teachable moment here?

IAM Advertising, an ad agency run by students from the Innovation in Advertising and Media High School in Brooklyn’s Canarsie neighborhood, has taken on its first paying client.

The National Black Programming Consortium/BlackPublicMedia.org will work with IAM Advertising, the first accredited agency in the country run by high-school students, to promote its PBS documentary series, “DC Met: Life Inside School Reform.” The series shows the lives of staff and students at an alternative high school in Washington, D.C. called DC Met.

Being from an alternative high school themselves, these students couldn’t be a better fit for the project.

The filmmakers had their first meeting with IAM Advertising last week. Students were charged with coming up with big, awareness-driving ideas for the campaign.

Series executive producer Jacquie Jones said that while PBS isn’t what most high-school students watch, they hope that these students can create a campaign that “gives kids center stage to talk about their lives” and more specifically a forum to talk about the problems they see with education and solutions that might exist.

And while the team of producers did charge the agency with creating a rich social-media campaign, the students are being given free reign to explore other media as well. “They have a better idea of how to reach their peers than we do,” said Ms. Jones.

In just the first brainstorming session, the students had many great ideas, she said. They became really excited about an idea for a major stunt, for example, something that the producers think could be great to drive press coverage.

As with most projects done at the school, a 4A’s-member agency will partner with the students on the campaign—in this case, Digitas. Fees paid to IAM Advertising will be distributed to educational funds administered by the 4A’s. Ms. Hill confirmed that the money will go back into the school.

IAM Advertising opened its doors for business in May. Set up to mirror an actual agency as much as possible, the students are given the opportunity to craft strategy, plan and place media, and produce creative.

The National Black Programming Consortium first formed a relationship with the school in March, when Ms. Jones saw Julius Dunn, the industry liaison for the high school, give a presentation on IAM at TedxHarlem. Students also presented a campaign for Michelle Obama’s “Let’s Move” initiative at that conference, which was featured on Creativity.

IAM High School, which is part of the New York City Public School System, opened in 2008 and now has more than 300 students in grades 9 through 12. Advertising is integrated into the school’s curriculum and agencies often come to the school to partner with the student on projects.

The school celebrated its first graduating class in June. The commencement address was given by Interpublic Group of Cos. Chairman-CEO Michael Roth, who was involved in the creation of the school. Of the 47 graduating students, 80% were pursuing either 2-year college or 4-year university degrees and a third were planning to pursue advertising-related careers.