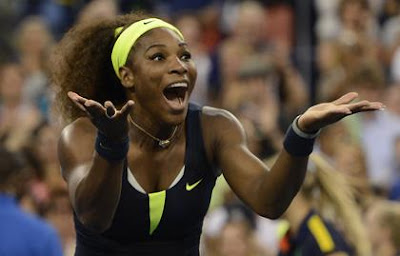 Serena’s three-set victory over world No. 1 Victoria Azarenka, originally scheduled for Saturday night but moved to Sunday afternoon because of rain, extended into the 7 p.m. ET time slot occupied by 60 Minutes. Because of the overrun, CBS appeared to rush through the trophy presentation.

The network aired a brief interview between Serena and Mary Carillo, then showed Serena receiving her trophy and $1.9 million winner’s check. Serena wasn’t interested in the money, nor in the congratulatory words delivered by the check’s presenter.

“Do I get to say anything else?,” Serena asked Carillo while she was handed the check.

Serena was whisked away for a photo with Azarenka and CBS cut to commercial. When the coverage returned, it was only for a quick wrap-up and brief plug for Monday’s men’s final. Coverage ended without Serena getting to say what she wanted.

We understand that advertising dollars are what makes the sports world go round. Tennis, without a plethora of built-in breaks in action like football or basketball, isn’t an easy sport on which to run advertisements. But surely CBS could have given Serena an extra 30 seconds. She’s not a faceless European player unknown to mass American audiences, she’s the queen of American tennis. I’m not saying they needed to let her filibuster, but a little sound bite couldn’t have hurt.

It’s not as if the network was rushed to get to 60 Minutes. CBS ran more than eight minutes of commercials and 60 seconds of tennis filler from the time the trophy presentation stopped airing to the time 60 Minutes came on air.