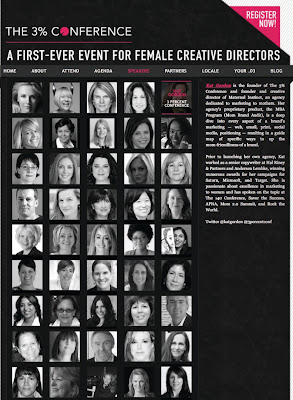 The 3% Conference hypes itself as “a first-ever event for female creative directors.” MultiCultClassics originally noted the affair last January, when it was still in the early stages of conception. Nine months later—on September 27 in San Francisco—the gal gala is ready to arrive.

The official website bemoans the dearth of dames in the advertising industry and wonders, “[Why] is the most powerful consumer segment in the world—women—not being marketed to from a place of understanding?” Conference creator Kat Gordon “connected the lack of good advertising to women to the lack of women creating that advertising.” The event name, incidentally, was inspired by the fact that only 3% of creative directors are female.

It continues to be difficult to rally behind the conference cause. Sorry, but White women are not minorities in the industry. In certain departments, they constitute a majority. Sure, the numbers are low for female C-suite executives and creative directors. Yet Karen Mallia—slated to speak at the event—provided perspectives to explain the figures. Neil French did too. Additionally, many White adwomen insist the glass ceiling is not an obstacle on Madison Avenue.

It’s interesting that Gordon is emulating multicultural marketing to build her platform. For example, she declared, “Having women creating advertising is not a gender issue, it’s a business issue.” She went on to say, “In a world where ad dollars have to work harder than ever before, brands know they cannot woo the gatekeepers of $4.3 trillion of spending by using messaging crafted—or green lighted—almost solely by men. Companies that demand female representation on their accounts will win with customers. And agencies that get smart about retaining female talent will win with clients.”

If Gordon’s argument nets the same response that minorities making similar statements have received over the years, well, The 3% Conference will be a 100% waste of time.

This is Kat Gordon responding. I really wish you dug a little deeper. We had 9 women of color speaking at our event and only 3 men. You also say "Sure, the numbers are low for female C-suite executives and creative directors." That's the sole focus of our event so it doesn't matter that women might not be minorities in other parts of the industry. I resent being depicted as someone totally out of touch with the reality of how hard it is for ALL women, especially women of color, in our industry. That is simply not true and I wonder what motivates you to write such a piece. I'm happy to have a civilized dialogue with you about this if you still feel that somehow showcasing a real lack of women in creative departments (just 3%) is a 100% waste of time because I'm white and it's even harder on women of color. ALL diaglogue around this issue is necessary and valid.

Sorry you resent being depicted as how you perceived the post depicted you. Mostly meant to make a few key points:

1. The numbers for female creative directors and C-suite executives are low—but not nearly as low as the figures for minorities.

2. The reasons for the low figures are fuzzy, as so many female C-suite executives insist the glass ceiling is no longer an issue—and even people like Karen Mallia offer reasons for the numbers (e.g., many women make different life/work choices) that indicate discrimination may not be the root cause. Again, mostly meant to communicate it’s difficult to rally behind a cause when lots of the women who have succeeded don’t seem to agree with your position.

3. Found it interesting that your position—“not a gender issue, it’s a business issue”—mirrors the argument constantly made for diversity. The argument has not worked to date.

Never wrote or implied “…showcasing a real lack of women in creative departments (just 3%) is a 100% waste of time because I’m white and it’s even harder on women of color.” Sorry, you inferred that.

You wrote, “ALL [dialogue] around this issue is necessary and valid.” Agreed. If you scroll through the 8 years of posts here, you’ll see there has been plenty of dialogue around the issue. And based on your summation, it’s all valid—whether you agree with it or not.