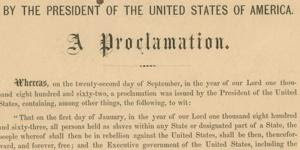 Issued 150 years ago this week, President Abraham Lincoln’s initial proclamation (pictured) to free the slaves in the South is on display this weekend at Harlem’s Schomburg Center for Research in Black Culture.

The first of the two documents has gained importance among historians as a turning point in the Civil War.

Slavery and its abolition were once treated by historians as minor parts of the story behind the Civil War, but that began to change after the civil-rights movement of the 1960s, said historian Edward Ayers, president of the University of Richmond.

Since then, the steps that led to emancipation have been recognized for their importance, with the Sept. 22 proclamation being a prime example.

“All our thinking about this has undergone remarkable recasting over the last 50 years,” he said.

“People begin now with slavery as the fundamental fact and emancipation and less with union as being the sole focus of attention.”

Commemorations began Monday with a national forum moderated by Ayers at the Smithsonian Institution. The discussion was broadcast to 100 schools, museums and libraries. The National Endowment for the Humanities also organized readings at the Lincoln Memorial.

Meanwhile, the only surviving version of the preliminary Emancipation Proclamation in Lincoln’s handwriting will make an eight-city tour of New York state this fall. The official government copy from the National Archives will be shown beginning Saturday in New York City at the Schomburg Center for Research in Black Culture.

Other exhibits will feature copies of the final version in the months preceding the Jan. 1 anniversary of its issuing.

The preliminary proclamation served as a warning that if the Confederacy did not end its “rebellion” against the United States and voluntarily abolish slavery, then Lincoln would order the slaves freed on the first day of 1863. Lincoln believed it was a way to use his military powers to push to end slavery.

Lincoln drafted the preliminary proclamation over the summer of 1862 but held off on releasing it because of Union defeats. He felt there was enough of a victory when Confederate forces turned back after the Battle of Antietam in late August that he went ahead.

There was once skepticism among historians about Lincoln’s deliberate approach. For example, neither version of the proclamation covered five slave-holding Union border states that were freed in separate federal actions. But Ayers says most scholars now view Lincoln as shrewd.

“What we used to see in some ways as a kind of political calculation, we now recognize as a necessary political ability to get things done,” Ayers said.

Slaves also had decided by the time Lincoln was drafting his proclamation in the summer of 1862 that they had a role to play in the war, said historian Thavolia Glymph of Duke University. They were flocking to Union soldiers to declare allegiance with the North.

“The preliminary Emancipation Proclamation essentially confirms, affirms what the slaves have been saying all along — that you can’t win it without us,” Glymph said. “Lincoln agrees.”

Even before the preliminary emancipation, Lincoln floated several ideas about how to end slavery. In 1861, he put out a plan for Delaware and other border states that would pay people to free slaves they owned, though it was never enacted. He also was studying ideas about encouraging slaves to return to Africa or Central America to separate the races, historian Eric Foner of Columbia University said.

His declaration that slaves would be freed was a turning point in a long process, Foner said.

“No one person or one moment is responsible for the end of slavery,” he said.

The government issued miniature copies of the preliminary emancipation that were distributed widely to soldiers in the field. Some survive and have been traded by collectors.

The official U.S. copy with Lincoln’s signature was a paper booklet held together with a ribbon. It’s in relatively good condition at the National Archives but is rarely shown. It has been handled less than the final proclamation, which has endured long-term exhibition and exposure to light in the past, said Catherine Nicholson, an archives conservator.

Views on the history and impact of emancipation continue to evolve, Ayers said, while at the same time many people still separate black history and white history.

“What historians have shown us over the past 50 years is that these are all part of the same history,” Ayers said. “Listening to just one of those stories is like listening to half a conversation. You can’t understand what was going on.”

Visitors recently to the National Mall on a recent day, though, generally didn’t know much about Lincoln’s initial warning on slavery.

Ray Morrison, a 64-year-old architect from Irvine, Calif., said he was familiar with the final version of the document but not its precursor.

“I do recall that it was a tactic to focus the Civil War, because there were some defeats, to make it not a war of rebellion but a moral issue,” he said of the Jan. 1 document.

Daniel Smith, 21, a student at Winston-Salem State University in North Carolina, said he had only been taught about emancipation coming in January 1863.

“Nobody really knows what caused Lincoln to do the emancipating, so this gives more insight that he was planning on doing this,” Smith said. “This is just more knowledge we should know about.”