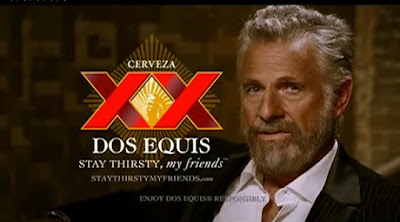 The ‘most powerful man in the world’ now boasts an endorsement from ‘the most interesting man in the world.’ Actor Jonathan Goldsmith, who portrays that formidable beer lover in TV ads for Dos Equis, is headlining an Obama fundraiser in Vermont next week.

President Obama can now boast the endorsement of “the most interesting man in the world.”

Jonathan Goldsmith, the bearded actor who plays that formidable character in commercials for Dos Equis beer, is headlining an Obama fundraiser in Vermont next week.

Goldsmith has developed a cult following for the beer ads, which feature his character performing a variety of outlandishly impressive feats: swordfighting two men at once, rescuing a bear from a steel trap, diving for sunken treasure and flirting with a series of beautiful women.

"Mosquitos refuse to bite him, purely out of respect,” one ad claims. “He is the most interesting man in the world.”

His catchphrase is: “Stay thirsty, my friends.”

Obama has recently become known as a bit of a beer lover himself.

His recent campaign appearances have included stops at local watering holes across the country, where he’ll share a beer with patrons as he makes his pitch for a second term.

The president also revealed that the White House even makes its own home brew.

But despite his apparent appreciation for the adult beverage, Obama will be at a higher-profile $40,000 a plate fundraiser with Beyonce and Jay-Z in New York City on the day of the Dos Equis pitchman’s event.

Tickets for Goldsmith’s Burlington fundraiser on Tuesday start at just $20. The actor will be joined by Shap Smith, the Democratic speaker of the Vermont House.