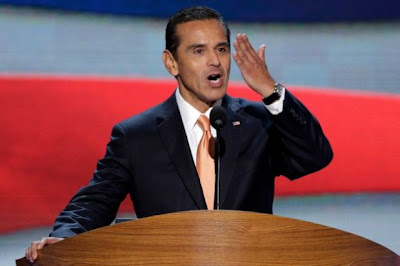 The Mayor of Los Angeles said Thursday that this year’s Democratic National Convention is the most diverse, inclusive convention in the country’s history.

“Look around you, everyone! This has been the most diverse, most inclusive convention ever held anywhere in the United States of America!” Antonio Villaraigosa, who is also chairman of the convention, said as delegates stood and applauded.

Right away, he cheered the Democratic Party’s support of gay marriage. “This is the first time that a major party platform recognizes marriage equality as a basic human right!” he said, pounding his fist.

During his Wednesday convention speech, former President Bill Clinton said that what he called “we’re all in this together” governing creates more jobs and wealth for all than “you’re on your own” governing does. Making the social equivalent of Clinton’s economic statement, Villaraigosa told delegates that diversity and inclusion is better for everyone. “Whenever we’ve opened up our party and our country, whenever we’ve opened up doors for more of our people, whenever we’ve deepened our democracy and renewed our commitment to equal justice under the law, we’ve grown stronger as a nation,” he said.

Villaraigosa said President Barack Obama “fought for the woman who deserves health care” and “for the DREAMers, young people brought here by no fault of their own.” Meanwhile, he said Republicans “plan to deny a woman control over the basic decisions that affect her health.” Regarding DREAMers, “Governor Romney wants to make their lives so miserable, so oppressive, so intolerable that they would leave behind the life they’ve built and ‘self-deport.’ How ‘bout that for family values!,” the Mayor said.

Accusing the GOP of disregarding facts last week in Tampa, Villaraigosa joked, “I have to say that when it comes to entertainment, to great stories and tall tales, the Republican Convention gave Hollywood a run for their money.”

He went on to criticize the Republicans’ plan to further cut taxes for millionaires and turn Medicare into a system of “coupons.”

Villaraigosa ended with the story of his grandfather moving from Mexico to Boyle Heights, a low-income Los Angeles neighborhood, and how the American dream enabled the Mayor to rise out of poverty.

As Villaraigosa continues to gain national notoriety, speculation about his future after he terms out as mayor in June ranges from an Obama administration appointment—possibly as Secretary of Transportation—to running for California governor or for president in 2016. The Mayor has dismissed these speculations.