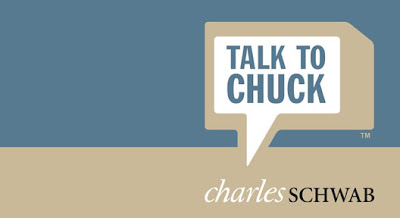 Advertising Age reported Charles Schwab has put the creative portion of its account into review—and incumbent Euro RSCG in New York will defend the business. Gee, sounds like the perfect opportunity for former Euro RSCG Creative Director Michael Lee to pitch his Madam search consultancy scam. Watch all the White whores ad agencies line up for the chance to compete.

Havas’ EuroRSCG Has Handled the Business Since 2004

Chuck wants to talk to other agencies.

Ad Age has learned that financial services and brokerage firm Charles Schwab, which has worked with Havas’ EuroRSCG, New York, since 2004, has started an agency review as it seeks new ideas for ad creative.

Alison Wertheim, VP-public relations at Charles Schwab, acknowledged that the firm has “initiated a search for certain aspects of our advertising work,” but declined to comment further. The process is understood to pertain to creative advertising only, and not impact other areas such as media-buying or PR. California-based External View Consulting, which is managing the review, declined to comment.

In a statement, Euro noted it will participate in the pitch and defend the business. The agency said: “Our work for Charles Schwab has raised the bar for the brand, and set a new standard for creative and effective advertising in the category. After almost 10 years, it is not unusual for a client to want to reassess its advertising. We look forward to being a part of the process. We’re as excited for the opportunity to work for Charles Schwab today as we were on day one, and we plan to continue our best-in-class work with the brand.”

Euro was responsible for launching the “Talk to Chuck” campaign Schwab launched to communicate to investors that the firm was there to listen to their money management concerns, and the push lasted even through the recession. The campaign has been in market since the fall of 2005, and different iterations have included the use of dialog balloons in print ads and TV spots that were shot using actors and then live-animated.

When Euro was tapped to lead marketing for Charles Schwab, the top client was Becky Saeger, who departed to pursue other opportunities. Ms. Saeger was succeeded last year by Laurine Garrity, who had been a marketer at TD Ameritrade. The decision by Schwab to consider other agency resources means the potential loss of not only a longstanding client, but a sizable account.

According to Kantar, Charles Schwab Corp. spent a total of $136 million in U.S. measured media last year, and in the first six months of 2012, it spent about $60 million.

The decision comes as Charles Schwab yesterday reported a significant downturn in trading volumes. Reuters noted that trading volumes fell a whopping 31% in August compared to the year-prior period, “highlighting the difficult environment for brokerage firms due to disengaged retail investors and low volatility in the markets.”