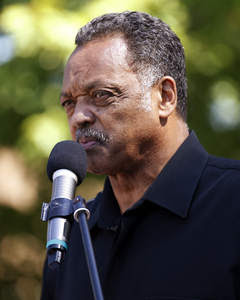 Chicago’s the Rev. Jesse Jackson added another notch Monday to his successes in international diplomacy — obtaining the release of two Americans who were expected to be imprisoned in Gambia for at least 20 years.

“This is a great day,” Edward Alford, U.S. ambassador to The Gambia for only two months, said by phone, minutes after an agreement was reached.

“Rev. Jackson has come here as a concerned American citizen, a humanitarian, and has talked to his excellency, President [Yahya] Jammeh, and President Jammeh has agreed to release the two prisoners. This was a marvelous performance.”

The two Gambian-born Americans — Tamsir Jasseh, a one-time U.S. soldier, and Amadou Scattred Janneh, a longtime professor at the University of Tennessee — were both accused and convicted of treason by the government of Jammeh, who recently carried out execution of nine prisoners.

Jammeh sparked international denouncement when he executed the prisoners in August, and vowed to clear his death row of the remaining 38 by mid-September.

But as the international crescendo rose, last weekend, the president of the tiny, West African nation widely accused of human rights violations relented on continuing the first executions in 27 years. He issued a moratorium.