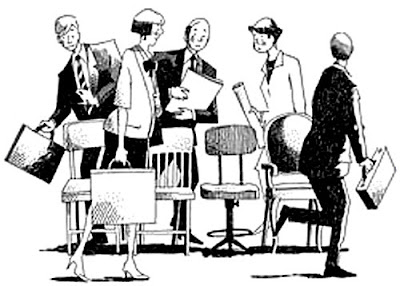 Advertising Age reported Element 79 was absorbed by DDB Chicago—probably with a huge sucking sound effect. The event represents another sad example of holding companies fueling the generic state of the industry. That is, Omnicom routinely shuffles and shuttles accounts between agencies within its network, ultimately communicating the services are parity. And the musical chairs scenario continues until an agency no longer has a seat in the game.

After bleeding accounts for the past few years, Element 79—the Chicago-based agency that Omnicom Group created more than a decade ago to handle PepsiCo business—is being absorbed by larger sibling shop, DDB, Chicago.

“By joining with DDB Chicago, Element 79 will have access to greater resources and capabilities enabling them to provide more scale to better service and lead their clients,” the agencies said in a joint statement. DDB, Chicago, CEO Peter McGuinness will remain as the office head while Element 79 CEO Brian Williams will be leaving the agency but serve as a consultant throughout the transition.”

As part of the agency’s absorption by DDB, about 25 employees from Element 79 will shift to DDB’s offices. It will also pick up a few new clients, including La Quinta, Supercuts, Bear Creek and Career Education Corporation.

It’s a move that can be interpreted as an overdue solution by Omnicom Group to Element 79’s woes in recent years.

Element 79, which was created in 2001 to manage the massive PepsiCo business, faced a protracted struggle after losing the majority of its anchor account in 2008. It lost Pepsi beverage brands Tropicana and Gatorade, only to lose another PepsiCo account, Quaker, later that year. That was the last piece of Pepsi business the agency had. Since that time, rumors have circulated in the Chicago ad community that Element 79 would fold into another Omnicom shop—namely DDB, Chicago—but its chief, Mr. Williams, has long batted away such the rumors.

In the meantime, several more accounts departed. Element 79 lost the American Family Insurance account in 2010. Then in August 2011, regional bank and major client Harris Bank, now called BMO Harris, put its account into review. Element 79 had handled the business since 2005; WPP’s Y&R Chicago won the account. Personal and nutrition product company Amway is also understood to have departed, and currently, one of the last major clients they had left, American Greetings, is understood to be in review.

While Element did manage to pick up some new accounts along the way—such as La Quinta Inn and Bear Creek—to help offset the losses, the agency was unable to recuperate.

Tracking with account losses, the agency’s revenue has fallen significantly over the years. Element 79 had revenue of $21.3 million in 2011, down 9.2% from 2010. In 2007, before the agency began losing the Pepsi business, it posted revenue of $45.9 million, according to Ad Age’s DataCenter.

The agency has also seen significant changeover on the creative front. In early 2011, the agency’s top creative exec, Dennis Ryan, left the shop to be the chief creative officer at Minneapolis-based Olson. Soon after Mr. Ryan’s departure, creative exec Canice Neary took the top creative post, but he exited in May 2012, according to his LinkedIn profile.

Ironically, the shuttering of the shop comes just as Omnicom is working on delivering yet another integrated, stand-alone solution to serve PepsiCo’s marketing needs.