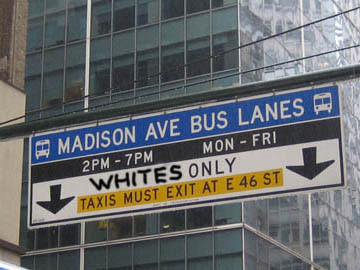 USA TODAY reported diversity is spreading to all corners and communities of the United States.

The Huffington Post quoted Antonio Villaraigos declaring the 2012 Democratic National Convention the “most diverse, most inclusive convention ever held anywhere in the United States of America!”

In other words, Madison Avenue remains woefully out of step—and out of touch—with the rest of society. Are communities targeting inner-city youth with internship programs and special high schools? Did the 2012 DNC include any events like “Where Are All The Black People?” At some point, you’d think the typical Mad Man might feel shame for the pitiful state of affairs. Instead, they pour patronizing pails of discretionary dollars into ADCOLOR® and elect more Chief Diversity Officers—or execute other forms of Delegating Diversity to deflect attention from the real issues.

The industry boasting breakthrough thinkers appears to be completely without an original idea here.

Thanks for this, and other posts cutting through the industry's PR approach to diversity. I recently completed a dissertation project entitled "Rebranding Diversity: Colorblind Racism Inside the U.S. Advertising Industry" and posted a 15 minute summary here:

Would love to get your reaction.

Already commented on your work here and here.

Gotcha. Thanks for posting. As you note, Tanner Colby is appearing at the next "Where Are All the Black People" event next month. I'll be speaking 6 days later at the Sustainability Summit on a panel about "Diversity & Inclusion Gaps in Advertising & Media Supply Chains" and hope to offer an alternative perspective: