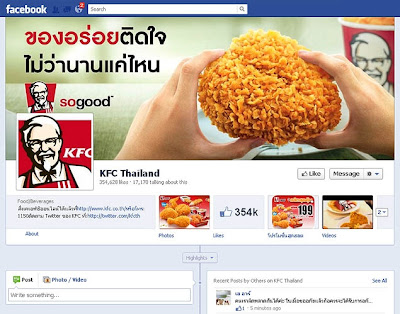 KFC Thailand probably did not receive many “likes” on Facebook after encouraging people to rush home during a tsunami scare and order some KFC chicken.

“Let’s hurry home and follow the earthquake news. And don’t forget to order your favorite KFC menu,” KFC Thailand posted on its Facebook page on Wednesday after a quake and a series of aftershocks struck off the coast of Indonesia.

Reminded of the 2004 tsunami that claimed more than 230,000 lives overall and 8,000 in Thailand, people were less than thrilled. They took to Internet message boards in droves to voice their displeasure.

Yum! Brands, KFC’s embarrassed parent company, issued an apology, saying “KFC Thailand expresses its sincere regret for the improper post on its Facebook page and apologizes for the insensitivity and timing of the message.”

It is not the first time that a company’s use of social media to promote their products backfired.

After nearly 20,000 people were killed by the earthquake and tsunami in Japan last year, Microsoft launched a Twitter campaign to raise money — but included a plug for the search engine Bing. Microsoft apologized.

Kenneth Cole used the Twitter hashtag “#Cairo” during the bloody Egyptian uprising in 2011 to promote his merchandise. “Millions are in uproar in #Cairo,” read the tweet. “Rumor is they heard our new spring collection is now available.” The tweet was later deleted.
Posted by HighJive at 7:15 AM